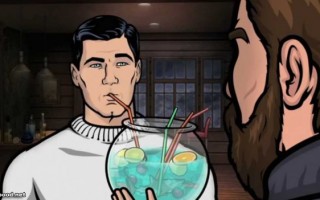 
I want to share screencaps of the hot tub party at the office and the appalling disaster at Malory Archer’s apartment, but the FX site system seems to be locked into some kind of deathmatch with Adobe Flash on my work station. Anyway, episode 3 of Archer sees Lana, Ray, and Sterling on their way […]


The second episode of Archer this season is not as spectacular as the first. The first ep of Archer season 6 was really really good. There are post-fight requests for bourbon in this ep, but no cobra whiskey. I demand cobra whiskey! Anyway, if you remember and care about the whole subplot with Conway Stern, […]