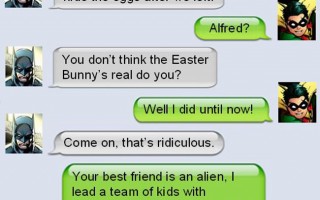 Happy Easter (from Batman and Robin)


Apparently, in addition to being the last day of WonderCon, the finale of The Walking Dead, and the first episode of the new season of Game of Thrones . . . today is also Easter. Just ask Batman and Robin.