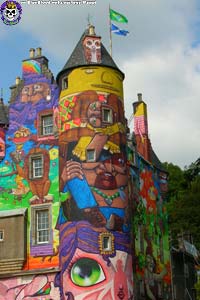 The Kelburn Castle and Estate fully opens to the public on Easter and maintains regular hours from Easter until November second. Although Kelburn Castle has many historical and architectural features of interest, the aspect people tend to find most notable is the graffiti-covered portion.

A couple of years ago, it was determined that parts of the concrete rendering were probably going to need to be replaced in the relatively near future. Concrete rendering or plastering is the surface placed on the outside of stone or brick walls for a combination of weatherproofing and texture. In this case the harling or pebbledash was applied to the walls primarily because soft sandstone requires careful weatherproofing to last. David and Alice Boyle, the children of the tenth and current Earl of Glasgow, thought it might be fun to use upcoming renovations as an opportunity to have famous graffiti artists paint a portion of the castle.

So the family commissioned a team of Brazilian painters called Nina and Nunca and the duo Os Gemeos or, translated from Portuguese, The Twins, who are known for their yellow figures and ability to garner establishment regard for what some might view as vandalism. This team of four graffiti artists were invited to do their thang on a castle wall legally, instead of guerrilla style. MTV competition-winning audiovisual artist and music festival scenester luminary Elliot Thomson of Preamptive and the multi-pronged artist group the Novak Collective produced a time lapse video of The Graffiti Project. The project was undertaken in residence and completed in early summer 2007, but, despite the fine reputations of all the artists involved, a debate still goes on over whether this was a desecration of a beautiful historical landmark or pretty much the coolest thing ever.

I don’t think I can think of any dwelling I would get more of a kick out of than a castle fortress with beautiful colorful graffiti painting on it. How often does one get to like something for both hipster and medieval reasons at the same time?

It probably comes as no surprise then that I think the graffiti art is a cool idea. I also think it is in keeping with how such fortresses tend to be extended in different styles over time. Lord Glasgow states:

“Kelburn Castle, unlike most grand houses in Scotland was not planned by an eminent architect like Adams or Lorrimer. It simply evolved over a period of some 700 years. As the family became richer or more important, it grew organically. Over the years, various Earls of Glasgow, or more probably their wives, changed sitting rooms into bedrooms, partitioned rooms to make extra corridors, altered staircases, raised the level of floors and ceilings, mover kitchens from one end of the house to the other and changed the front door from the north to the south side of the house and then back to the north again. The result is that Kelburn is an eccentric half castle, half-house, constantly in use and still very much lived-in.”

Some of the concept of painting part of the castle was consciously to unite urban art and rural canvas. Looking at the history, though, the whole thing is very much in keeping with the origins of the estate. It is always odd for Americans, with our comparatively brief national history, but the Europeans really track where things come from for centuries, although there are always those who contend that some of European genealogy and history is at best excessive in detail.

At any rate, Kelburn began as a Norman Keep when the de Boyville family, who came from Normandy with William the Conqueror in 1066, moved to Ayrshire in 1140. It is estimated that the Norman Keep edition of the building on the Kelburn Estate was completed by 1200ish. Some time in the following centuries, the de Boyvilles evolved their family name to Boyle, which lead to cultural confusion over whether that was a proper Scottish noble name or an Irish name. Because Europeans care about such matters, the Boyles, despite their seven or eight hundred-year-old estate and titles, are often left off various lists due to their lack of an official tartan and a suspiciously Irish-sounding name. Technically, their name is Norman invader and many families have invented official tartans to get in on the whole uniforms and team colors culture. From an American perspective, I’ve spent time in Scotland and I’m probably more educated than the average American and I probably could not differentiate between Scotland and Ireland on a map with a vintage traditional broadsword to my head. Whether or not the threatening broadsword had creative graffiti on it.

In 1581, a more impressive castle was built around the original stone structure. During the following century, the Boyles got very paid in shipping and shipbuilding and, ahem stamping out smuggling in service of Customs & Excise. The Boyle family was rewarded for their public service in 1703 with the title of Earl. When he received his title, the first Earl of Glasgow had recently completed construction on Kelburn House, a mansion built to address the difficulty of castles being considered unfashionable at the time. If the first Earl was so concerned about what people might think, he is probably turning over in his grave over the idea of graffiti adorning Kelburn Castle, but it really is in keeping with updating with the times the same way he did. In the 1800’s, the fifth and sixth Earl of Glasgow caused the size of the Kelburn Estate to dwindle, the fifth through a fabulous fashionable gambler scenester lifestyle and the sixth through endowing churches. In between being seen at all the best parties and religious events, they did manage to put a Victorian wing around one of the 1581 towers.

In 1977, the current and tenth Earl of Glasgow and his wife Isabel were culturally generous enough to open the grounds and buildings of their family home, of many generations, as a park and museum for part of every year. You can now visit the incredibly beautiful and storied Kelburn Estate from Easter through November second.

Posted by Amelia G on April 12, 2009. Filed under Blue Blood. You can follow any responses to this entry through the RSS 2.0. You can leave a response or trackback to this entry
Tags: art, artists, castle, earl, easter, elliot thomson, fabulous, fashion, glasgow, graffiti, hipster, kelburn, medieval, mtv, museum, novak collective, os gemeos, scenester