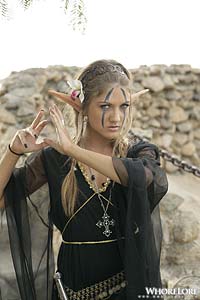 I think that these swords and sorcery sex videos would have been perfect viewing material when I was Treasurer of Science Fiction Club in college. The sort of group experience where everybody would have gone around afterward for weeks saying, “I would never fuck a barbarian.” Which would be pretty awesome. 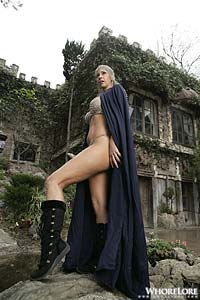 As I go through the fantasy episodes, I realize that a bit more is familiar and not just because Forrest Black and I have shot some of the armor worn in various scenes. See, there is this castle in the Hollywood Hills which regularly has pretty notorious after-parties. It is a beautiful space, lots of fun to hang out at, and, if there is a drug you’ve never seen anyone in Los Angeles do before, it is definitely the spot to go to rectify that lack of experience. It is also a very enjoyable place to get into the sorts of intellectual conversations which are not as common in Hollywood as I might prefer. The castle peeps keep telling me I should shoot naked gothic girls there and had told me a lot of porn had been shot there (also part of Spinal Tap!) and I always thought it was odd I had not recognized any. That circumstance has also now been remedied. So about a third of Whore Lore sex scenes take place at a place where I have spent some quality late night time. And actually so have quite a few of the people who appear in Blue Blood pictures and post on the boards.

Suddenly I have a whole new perspective on the Whore Lore repetition of scenarios where people are all wondering what they did and who they slept with. Which is kinda awesome. We’ve got a free Whore Lore photo gallery for your viewing pleasure and I recommend checking out the site for the naughty stuff. But I want you all to know I would never fuck a barbarian. To the best of my recollection.

Posted by Amelia G on December 20, 2008. Filed under Blue Blood. You can follow any responses to this entry through the RSS 2.0. You can leave a response or trackback to this entry
Tags: bianca-dagger, darkness, entourage, evil, fantasy, hbo, hollywood, marcus-london, medievalist, science fiction, whore-lore, whores, world-of-warcraft, wow