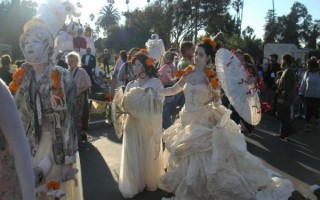 Everybody Likes Cupcakes and Ass


In this original Blue Blood interview, Forrest Black and Rachel Kramer Bussel have just eaten a whole lot of delicious cupcakes. Forrest Black interviews the writer/editor about her Cupcakes Take the Cake blog. They also discuss her naughty themed anthologies which include Spanked: Red-Cheeked Erotica. Writer/editor Clint Catalyst has a cameo appearance. And I helped […]

Cupcakes and Sexperts at Freddy and Eddy


I’ve mentioned the most excellent writer/editor Rachel Kramer Bussel‘s In the Flesh reading series here before. Kicking off during this week’s Book Expo, local editor/writer Carly Milne started curating a left coast version of In the Flesh. The event was at a Venice couple-oriented adult store called Freddy and Eddy. Freddy and Eddy has the […]