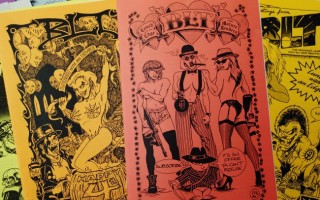 
BLT was my first publishing project as an adult. My friends and I did it from various different punk rock group houses. It is hilarious as fuck, especially if you’ve ever spent time in dark smokey clubs or science fiction conventions and related haunts. It was distributed primarily at sex shops, punk boutiques, SF&F and […]


I first came across the band Motionless in White because the lovely Blue Blood babe Franccesca de Struct said she was going to be in a music video for them. The song is called “America” and is a catchy guitar-driven goth-industrial rant about how, with all the corruption in church and government, why is anyone […]


My favorite little corners of the interwebs are all a buzz today with excitement about the announcement from Metropolis Records that legendary goth-industrial artist and acclaimed dark music producer and musical journeyman Tim Skold is releasing new SKOLD music once again, with his current full length solo LP being distributed with the full might of […]