BLT was my first publishing project as an adult. My friends and I did it from various different punk rock group houses. It is hilarious as fuck, especially if you’ve ever spent time in dark smokey clubs or science fiction conventions and related haunts. It was distributed primarily at sex shops, punk boutiques, SF&F and RPG conventions, and in the aforementioned dark smokey clubs. (I managed an adult boutique called Night Dreams, so the sex shop distro just seemed logical.)

I used to get a lot of letters from people who assumed a zine called Black Leather Times was a porn or fetish mag of some sort because it had leather in the title. Especially after it got written up in The Washington Post and such, so a lot of people from very far afield heard about it. So I thought about what sort of adult mag I’d like to be producing, as there seemed to be a demand, and I started publishing Blue Blood magazine in print. Which, of course, eventually led to BlueBlood.com and its suite of spooky naughty membership sites and this SFW entertainment site and a bunch of other cool stuff.

In all fairness to those titillated by the Black Leather Times moniker, BLT has had a lot of funny and insightful writing about sex and fetish and dating. Ever wanted to know how to use stage blood for birth control? Wondering whether to share your crack cocaine on the first date? Considering the finer etiquette points of threesomes? Want to be a goth-industrial strength heartbreaker? Want to pick up punk rock babes? Considering jobs where you have to read things (translated from a Japanese scientific study) like “sperm was harvested from male rabbits using an artificial vagina”? BLT has you covered. Back the BLT Kickstarter and you can get 400 pages of appallingly humorous advice like this :-) 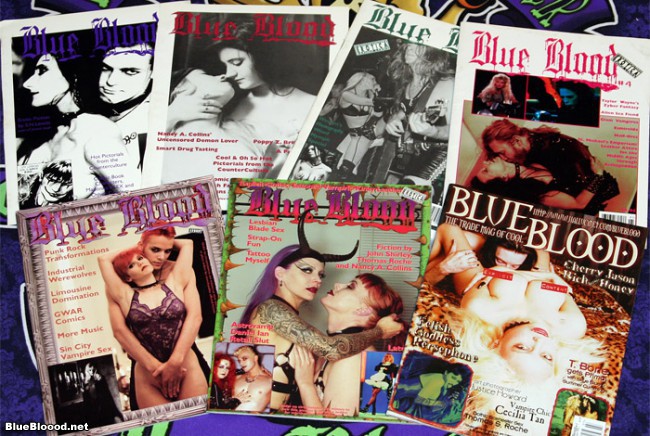 Posted by Amelia G on July 3, 2015. Filed under Books, Headline, Sex. You can follow any responses to this entry through the RSS 2.0. You can leave a response or trackback to this entry
Tags: black leather times, blt, blue blood, goth-industrial, science fiction convention