As I’ve been working on pulling everything for the BLT Punk Humor Book 25 Year Black Leather Times Zine Omnibus, I’ve been finding all sorts of odd surprisingly non-ephemeral ephemera from the past. Below you will see an advert which ran in SPIN magazine approximately a zillion years ago. The ad is for both BLT and Blue Blood and a bunch of other titles. Looking through this advert, I think the only other folks left standing from this piece of the zine revolution are Boing-Boing (who are crushing it online) and High Times (who pre-dated desktop publishing.)

There was this project called Magazine Central and it shared large, high ceilinged, nicely sunlit, SF offices with these two zines called Future Sex and The Nose. Magazine Central had the clever business model of buying full page ads in high circulation magazines and dividing those pages up into lots of little ads they sold at a profit, mostly to other zinesters, keeping just a few slots for themselves. Magazine Central also did the order processing, at a time when getting credit card processing was actually rare and challenging. I actually kind of wish someone would do something like Magazine Central now. Only maybe with more careful accounting.

In the end, Magazine Central wound up screwing everybody. Kind of unnecessarily; I would have considered us square if they’d given me some punk rock barter, in place of the funds they owed. I don’t recall either of their names, but I remember having a conversation with the wife of the dude from Magazine Central, where she told me that things were so bad that her husband had taken a day job. At the time, I was publishing Black Leather Times and Blue Blood from spare rooms in a Maryland punk rock group house called Hollowpoint (a nice punk rock group house, but still) and had never quit my day job. So I was nonplussed by her presenting a day job as the worst thing in the universe. Just a really insensitive thing to say to a zinester because most zines are at least partly a labor of love. Heck, I’ve heard the Newhouse family (of Condé Nast) loses money on magazines but loves publishing. Anyway, the Magazine Central mode of outreach was pretty cool while it lasted and I think we connected with a lot of readers we might not have gotten to reach otherwise. I only wish it had been able to continue longer (by say not blowing so much of their budget on San Francisco VC parties and expensive offices.)

The best ad ever was in Esquire for one issue before the mag decided stuff like Blue Blood was too racy for their readership. Their readership, who purchased in great quantity, clearly did not agree with their editorial management. Fortunately, others like SPIN were more progressive and open-minded.

Anyway, I’ve been thinking about those times a lot. I’d love it if you guys would check out the BLT Kickstarter and consider backing it. You know you need 400 pages of bite-sized anti-social humor. 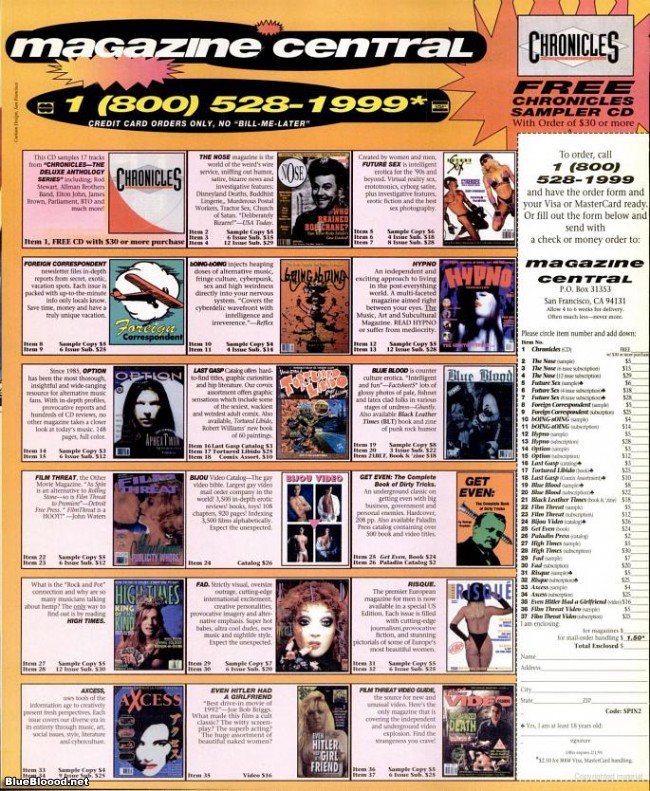 Posted by Amelia G on July 17, 2015. Filed under Books, Headline, Trade/Business, Trappings. You can follow any responses to this entry through the RSS 2.0. You can leave a response or trackback to this entry
Tags: black leather times, blt, boing-boing, esquire, future sex, high times, kickstarter, magazines, publishing, the nose, zines, zinesters