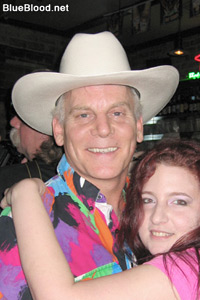 I’d like to take a moment out from my busy schedule of rolling around on the floor laughing at the recent obscenity prosecutions in the United States, in order to comment on them. Veteran adult video performer and producer Max Hardcore was just found guilty of obscenity in Florida. For those who are unaware of his oeuvre, Max Hardcore was the first guy on the extreme-hardcore-with-teens bus. Whether or not you really want to see gaping anal or watersports or puking in a sexual context or even naked chicks who look younger than twenty-two, Max Hardcore certainly deserves both credit and responsibility for bringing such things into the popular culture. Apparently, along with credit for his ground-breaking work in rough sex on camera comes an attempt by the State of Florida to nail him on 20 counts of distributing obscene materials through the mails and internet. Now I have it on good authority that various government agents have been so anxious to bust Max Hardcore over the years that one such over-eager and nervous gent once accidentally discharged a firearm in Max’s house, during a study of paperwork, such that repairs were needed. Now, don’t get me wrong, Blue Blood magazine in print used to get screeners of Max’s movies way before they got as extreme as they supposedly are now. And I couldn’t sit through one then. At the time, I was just like, how did some construction worker manage to parlay an interest in sex into this huge career?

Now Blue Blood art director Forrest Black and I used to enjoy going to all the adult industry trade shows. We attended the adult video shows in Vegas since the pre-Internet times when the adult video show was a little room in the Sands which was part of CES, the Consumer Electronics Show. The very first time I encountered Max Hardcore in person, we shared an elevator at one of those shows and Max told Forrest he liked his fun fur coat. That was about the extent of the interaction and it was still enough for me to be blown away by Max’s charisma. Max Hardcore has that kind of rockstar thing where you stand next to him and he just exudes hotness. He has perfect manners, only you just know he is nasty as all get-out in the bedroom. He has that total Madonna in the living room and whore in the bedroom thing down and he is just very appealing on a basic lizard brain level. Everyone knows a guy where chicks do things with him that they would normally never do. Max Hardcore is one of those guys.

Max Hardcore is no stranger to the legal hot seat, but the bizarre thing here is that he actually got convicted of ten counts and his company got convicted of ten. I’m not sure how it works if a corporation has been naughty, but whatever. One of the freakiest things about this case was that jurors have actually come forward and said that they found against Max because of how the law was explained to them, but they felt he deserved to go free. A jury of his peers felt that the law was unfair and Max was doing no wrong. The State of Florida was actually trying to take the man’s house in California and the jury was having none of it. Full disclosure: I have been a guest at said house and enjoyed Max Hardcore’s hospitality and, yes, that is a photo of me with him at a bar, but, unlike the unfortunate jurors in this case, I have never been forced to watch one of his movies all the way through. I remember when I was a wild girl, but now I am a total prude because I draw the line sexually way before I start vomiting on someone’s cock. This has really messed with my sense of self, but I digress.

Now, of course, Max Hardcore will be appealing the ruling against him. I think he stands a good chance of winning because (a) he always wins this sort of thing, (b) the charges are ridiculous, (c) he just really does not come across as a bad guy, and (d) if even the jurors in Florida were sympathetic to him, the higher up the legal chain he goes, the more likely I think things are to go his way.

A number of adult industry chicken littles (Sky-is-falling ninnies not to be confused with Paul Little aka Max Hardcore aka Max Steiner.) are all aflutter about how this means the end of adult video and adult internet and freedom of speech etc. etc. etc. They are quick to point out that people who live in more liberal parts of the country such as California should be freaking the fuck out because of the Ira Isaacs case starting this month. Round about now, you are probably asking, who is Ira Isaacs? I know I’d never heard of him.

Apparently Ira Isaacs makes bestiality and scat videos. Inside the United States. It seems that nobody ever pointed out to this Ira Isaacs guy that there is a reason there are countries like Holland. According to adult industry publication XBiz, the titles in question in the Ira Isaacs case include “Gang Bang Horse — ‘Pony Sex Game,’” “Mako’s First Time Scat,” “Hollywood Scat Amateurs No. 7,” and “BAE 20.” I’m not even going to ask what BAE stands for, as I previously thought it stood for Best America Erotica, a fine series of book anthologies, edited by Susie Bright, which I have been published in. And I’d like to keep thinking of BAE that way.

Now, while poor Max Hardcore was found guilty for distributing videos of consensual heterosexual human sexuality in Florida, the Ira Isaacs case had to be halted yesterday. Because the Los Angeles Times reported that the judge in the case had a personal website with naughty materials on it: “Alex Kozinski, chief judge of the U.S. 9th Circuit Court of Appeals, granted a 48-hour stay in the obscenity trial of a Hollywood adult filmmaker after the prosecutor requested time to explore “a potential conflict of interest concerning the court having a . . . sexually explicit website with similar material to what is on trial here.” In an interview Tuesday with The Times, Kozinski acknowledged posting sexual content on his website. Among the images on the site were a photo of naked women on all fours painted to look like cows and a video of a half-dressed man cavorting with a sexually aroused farm animal. He defended some of the adult content as “funny” but conceded that other postings were inappropriate. Kozinski, 57, said that he thought the site was for his private storage and that he was not aware the images could be seen by the public, although he also said he had shared some material on the site with friends. After the interview Tuesday evening, he blocked public access to the site. Kozinski is one of the nation’s highest-ranking judges and has been mentioned as a possible candidate for the U.S. Supreme Court. He was named chief judge of the 9th Circuit last year and is considered a judicial conservative on most issues. He was appointed to the federal bench by President Reagan in 1985.”

So, just to recap, a sexy and well-known guy who gets chicks to consensually do crazy stuff on camera has to spend bank on attorneys because of a ruling in Florida that even the jurors do not agree with. An obscure bestiality and scat aficionado in California can’t get a fair trial because the State is having difficulty finding a judge who does not collect bestiality-related porn pics. In California, it is apparently acceptable to post a repository of same to the internet, provided you think the content is “funny” and are not tech-savvy enough to know that people can, ya know, see things which are posted to the web.

You just have to see the humor in all that. To keep from weeping.