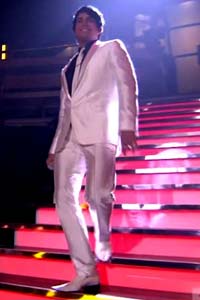 Adam Lambert was feeling good tonight on American Idol. The producers of the show chose to put him in the final performance slot of the night and it is a good thing they did because nobody else on there could have followed him. He took a fine strut down the towering American Idol staircase and sang a terrific rendition of “Feeling Good”. My only quibble of the evening is that Adam Lambert was wearing a white suit with a black shirt this week and a shiny black suit last week. This week is Rat Pack week and last week was Disco. Maybe the American Idol stylist and tailor were running behind schedule on the John Travolta Saturday Night Fever white suit outfit and ahead on the updated mobster chic black suit. Or maybe Adam Lambert was just looking to defy expectations and I can get behind refusing to be predictable, especially when the guy is that talented. And looks that fine in both black and white suits.

Perhaps The Roar of the Greasepaint – The Smell of the Crowd did not catch on with London theatre-goers because it was more blatantly about class issues than the class-bound British tend to be comfortable with. This is purely my social anthropology guess, based on knowledge of British culture and the subject matter of the musical, so it is possible that the cast was not appealing enough or any of a zillion other possible monkey wrenches gummed up the works. Certainly, Sammy Davis, Jr. was able to get a huge audience for his rendition of the song “Feeling Good”. 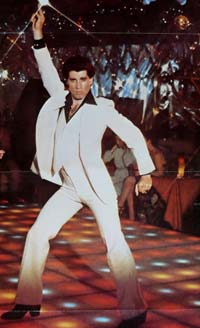 Both Leslie Bricusse and Anthony Newley have had their music used in an impressive number of soundtracks for both television and movies, both works written as a team, independently, and with other partners. “Feeling Good” in specific is a very popular song to be covered. Jazz musician and civil rights activists Nina Simone did one of the best known versions of “Feeling Good”. Some other notables who performed “Feeling Good” include Bobby Darrin, John Coltrane, and more recently George Michael and The Pussycat Dolls. Torchwood heartthrob John Barrowman covered it for his 2007 album Another Side. British alt rock band Muse covered the song a few years back and had their version promptly snarfed by Nescafe in a no-permission fashion which apparently resulted in an out of court settlement. The version of “Feeling Good” which Adam Lambert performed so beautifully on American Idol appears to be the Muse arrangement of the song. In a nod to the recently past underperforming disco night, I feel compelled to mention that Olivia Newton-John also covered “Feeling Good”. Maybe I only count Olivia Newton-John as disco because I saw her in Grease go from good girl to awesome sexy, black-clad, big-hair bad girl opposite a sexy, lean, young John Travolta. And I saw Grease a loooooooooong time before I actually saw John Travolta strut his stuff in Saturday Night Fever (not Saturday Night Live) in his iconic white disco suit.

“Feeling Good” lyrics by Leslie Bricusse and Anthony Newley for the musical The Roar of the Greasepaint – The Smell of the Crowd and made a Rat Pack favorite as performed by Sammy Davis, Jr.:

Posted by Amelia G on April 29, 2009. Filed under Blue Blood. You can follow any responses to this entry through the RSS 2.0. You can leave a response or trackback to this entry
Tags: adam lambert, american-idol, disco, disco night, feeling good, john travolta, muse, rat pack, sammy davis jr, saturday night fever, willy wonka