Is it wrong to kiss and tell?

Is it wrong to kiss and tell? Does it make a difference if you tell just one person or millions of people of just three people but one of them tells millions?

This week, the internet is all aflutter over the Karen Owen Powerpoint presentation. If you are not up on your Duke sex scandal news, a recent graduate of that esteemed college sent three friends of hers a funny Powerpoint presentation, deconstructing various hook-ups with athletes about campus. I surely do not share her taste in men. She’s all about the baseball and lacrosse and I feel, if you must do a team sports guy, crew or football were always my choices. Individual sports like martial arts are by far the sexiest, in my view. But whatever. Parts of this Duke grad’s list were mildly amusing, but it went on longer than I felt like reading, not knowing any of the participants. But Gawker is all over it, zillions of people are searching for info on the Karen Owen Fuck List online, and HarperCollins and William Morris are both ready to make a deal with the author. Karen Owen apologized to those she defamed/lauded/embarrassed via the traditional interview with Jezebel. 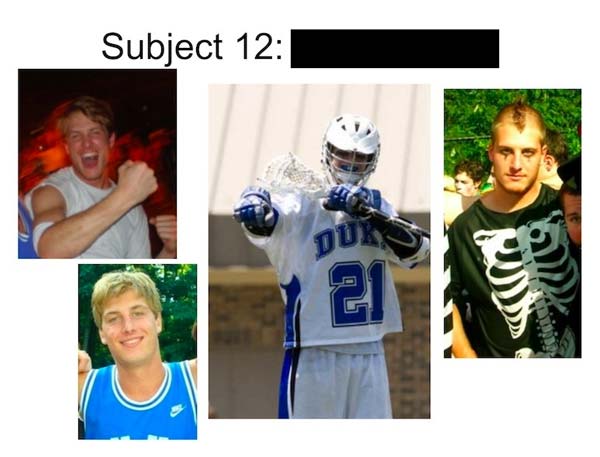 I’m not sure I wholly get what the big deal is. The most notable aspect of the way Karen Owen ranked her sexual conquests is how well she formatted it. But it brings up the question of how responsible is the artist (or general jerk) for what they write and how it impacts others?

In the age of the internet, a funny bedroom story can go viral in a mass media way which was pretty unthinkable just fifteen years ago. I did a punk rock humor zine in DC called Black Leather Times or more commonly called BLT. Most stories included full names and/or punk rock nicknames of all guilty parties; there were no innocents. When BLT was printing 2,000 copies which were all distributed at goth-industrial nightclubs, science fiction conventions, punk house parties, and via zinester orders, this meant the writing was hilariously balls-out, but it also was still going to a pretty defined audience.

What happens when a funny anecdote gets beyond its intended audience? For example, senior Blue Blood writer Will Judy once wrote about a defunct relationship with one Nina Karp. I thought the article he submitted to BLT was pretty amusing and published it. Over a decade later, I’m told Nina complained to Will about it, citing in particular her annoyance at the mention of Astroglide. Not sure why that should be the standout bit. The subject couldn’t be bothered to ask me for a favor, Will knew the editorial policy when he submitted his work, and that web site was created about seven hard drive failures ago and would be hellish to edit. I asked my mother, who is fairly conservative on such matters to read it, and she thought it was funny, so it’ll probably be in the BLT 20 Year Anniversary book.

For myself, I tend not to write about my most intimate relationships, but I feel the casual is fair game. If someone will have a sexual interaction with a partner they barely know or don’t take seriously, is there an expectation that all details will remain private? Should there be one?

Posted by Amelia G on October 7, 2010. Filed under Popcorn, Sex. You can follow any responses to this entry through the RSS 2.0. You can leave a response or trackback to this entry
Tags: astroglide, blt, duke, gawker, goth, harpercollins, jezebel, karen owen, nightclubs, powerpoint, punk, sex scandal, sports, will judy, william morris, zines