My Disappointment with Google+ 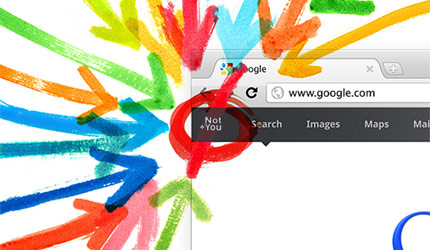 Ok, I have to admit, the Google+ novelty is wearing thin.

The vast majority of people I know are performers, artists, writers, bloggers, activists, musicians, etc. and too many of the accepted cultural norms within each of those communities run afoul of the unevenly enforced prudish neo-Victorian Google+ behavioral and identity standards. Most of the people I know online don’t use their ‘real names’ for a host of legitimate reasons.

People work hard to build their social identity, to build their personal recognition, particularly within each of the communities I just mentioned. That identity or personal brand isn’t always tied to their real name. That is simply the way it is. To force people to break with their established social norms is inappropriate and wrong. Google+ is a social network not the DMV, although where I live you can even have a fictitious name on your license for an extra $12 fee.

I’ve always used my real name, the name my parents gave me, but in today’s information saturated age, I have to honestly admit there are times I regret it. I do think it is ultimately the right thing to do, but too many timid sheep in the world make it seem unwise. I can’t really blame people for making the choice to keep their private lives separate from their SFW identity, can I? But then again, why should I pay the price for being open and honest about who I am and what I do when I know full well the deviousness others mask with false identity? These are questions I struggle with.

It’s been a number of years since ‘online reputation’ systems were the hot topic at conferences like SXSW Interactive and others. Where did all of that go? Real people obviously feel like they know a lot of the people who have already been booted off Google+ for not being, or at least seeming, real enough for Google’s standards. Plenty of real people may have gotten to know me over the years through Blue Blood, our various sites, maybe LiveJournal, a few on MySpace, school buddies from Facebook, local friends and tech folks through Twitter. So, why should I have a legitimate fear being booted off Google+ for not having a common name like Mike Smith? I could easily register an account under Mike Smith and be far less likely to have to prove myself to anyone.

Also, I should be free to talk socially within the context of my professional circles with my professional contacts about the professional business we all do, even if it isn’t appropriate for someone I don’t know’s theoretical office job. I should be able to talk openly with models about the sort of work we’re likely to do together. I should be able to talk openly with photographic and publishing contacts and colleagues about the things that made us contacts in the first place without fear of being booted for being NSFW for some stranger. Maybe it’s not all subject matter for everybody, but isn’t that the core idea of having circles of contact?

If someone somewhere doesn’t like the content of what I’m sharing with my friends and/or doesn’t want to see it, they have the option not to. I’d have to wonder how they got into my circles in the first place, but that’s a different question. The problem is that with some of the sites I design and some of the photography I do, most of the people I’ve come to know socially do work and play within a realm that is apparently at least occasionally a violation of the G+ prudish and restrictive terms of service.

If what I, or most of the people I know, are doing were somehow illegal, I might be able to understand the barrier, but it’s not. I should have the liberty to speak openly to an appropriate audience. Although realistically that audience isn’t really welcome on G+ because they mostly use pseudonyms anyway. Even if they were welcomed, I wouldn’t be allowed to tell them much about what I’m up to professionally because somebody somewhere thinks it’s Not Safe For Work, even if ironically it actually is our work.

So-called safe for work forced piety (or appearance thereof) simply is oppression. Demanding to see proper identification papers from people with questionable names, like mine, is also oppressive. Oppression is clearly evil. *Don’t be evil* is still the Google motto, right? Most of the people I know have already abandoned Google+ as a viable social network. Maybe it’s time we all moved back towards smaller more local social systems that understand and accept us for who we are and what we do.

Posted by Forrest Black on August 20, 2011. Filed under Headline, Manifesto. You can follow any responses to this entry through the RSS 2.0. You can leave a response or trackback to this entry
Tags: google, social network