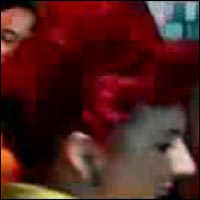 Fueled by Ramen recording artist Cobra Starship is a very modern band. They are currently on tour, opening for Fall Out Boy, along with fellow openers Paul Wall, +44, and The Academy is . . . Cobra Starship’s name sounds like a cross between TheCobrasnake and late Jefferson Airplane. They’ve got a song on the Snakes on a Plane and the new Teenage Mutant Ninja Turtles movie soundtracks, ringtones available, a Glamour Kills clothing endorsement, and impressively pimped out profiles on all the good social networking sites. They even (I’m sure ironically) cover Lionel Richie’s “Three Times a Lady” and Michael Jackson’s “Billie Jean.” The CS site itself contains a sort of pseudo-ironic “typical” rockstar history, which is probably actually based on true events but liberally gilded. Band leader Gabe Saporta’s animal familiar-dictated mission is apparently teaching “hipsters to not take themselves so seriously and by telling emo kids to stop being pussies.”

I guess Cobra Starship’s genre is Self-Deprecating Post-Emo? I don’t know. The salient point for Blue Blood readers is that Xanthia Doll appears dancing her yellow-clad booty off in their new video for their long-windedly-named single “Send My Love To The Dancefloor, I’ll See You In Hell (Hey Mister DJ)” from their album, While The City Sleeps, We Rule The Streets. Xanthia says, “I’m so happy I’m in it! It was a lot of fun to be a part of! Just look for red hair and a bright yellow jacket and you’ll see me! Wheeeeeeeeee!!!!!!”

Xanthia’s positive attitude is a lot of fun, but I have to admit that I like my rockstars to truly own what they do. If I were more familiar with modern emo, apparently Cobra Starship’s Gabe tapped a number of big deal emo folks to work on the project. An emo allstar band slagging off emo kids for being pussies is, you know, emoriffically ironic. I’d be more versed in emo if it could stand up and be proud of what it is, instead of hiding behind irony, self-deprecation, and pretending they don’t really mean whatever it is they are expressing. Emo adults need to stop being such pussies.

But the video looks fun with Xanthia in it: