Would you hit it? 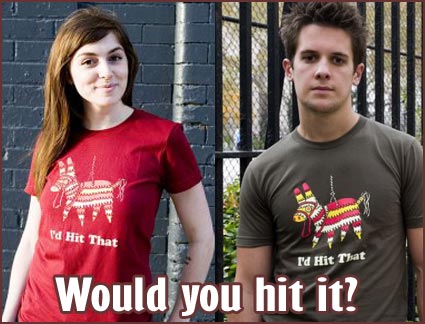 (Thanks to our beloved advertiser Busted Tees for the photos in the graphic. Please do not blame them for the lewd linguistics lesson which follows.)

Will Judy: Coffee had better be the answer right now, because there’s nothing else going.

Amelia G: I am not sure you are jovial enough for an ROFL knuckle set. What is TLDR?

Will Judy: “Too Long; Didn’t Read”

Shittiest, most smugly dismissive response to a post possible, worse than “Id hit it” or “tranny?”

Amelia G: It is probably good for the world that I didn’t know what that stood for and, perhaps solely as a result of this, had not noticed it before.

This conversation reminds me that I need to start a “Would you hit it?” thread somewhere.

As a linguistically informed individual, how would you deconstruct (deconstruct is my word of the week) the hit it expression. What is one hitting? Is the usage that one will smack one’s privates against another’s? Is it a more general colliding of human beings in a sexual context? Is hitting it something one does *with* someone else or *to* someone else? Is the usage supposed to apply only to men hitting women (e.g. tap that ass) or also to women hitting men (as it certainly is used in common parlance)?

Will Judy: Etymologically speaking: One of the many theories explaining the word “fuck” traces it back to the Olde Englishe verb “fokken”, “to strike”. Fokken in the sense “to strike” is still in use in German, although there is a separate word, fichen, for “to fuck”.

If I posted that response on many a forum, I would get a flood of TLDR responses. See, I’m schooling on everything.

I think the current usage of “hit that” traces back to “hitting skins”, late 80s slang conflating beating drums (drumskins) with having the vigorous sex. “I’d hit skins with that fine thing” boiled down to “I’d hit that”.

There’s also the whole thing of shouting “Hit it!” to get something started, which goes back to time immemorial.

Amelia G: You have no idea how much pleasure and relief I am currently receiving from your explanation. Can I repost this? (with credit/blame of course)

Will Judy: You have my freely given permission.

Posted by Will Judy on June 27, 2008. Filed under Blue Blood. You can follow any responses to this entry through the RSS 2.0. You can leave a response or trackback to this entry
Tags: busted-tees, coffee, fuck, rofl, sex, tattoo, tattoos, tldr, tranny, would-you-hit-it