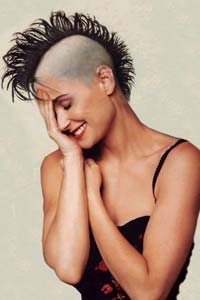 Ashton Kutcher is the pretty much undisputed leading twit on Twitter. As of this moment, he has 2,839,413 followers, outflanking people like Barack Obama, Perez Hilton, Shaquille O’Neal, Britney Spears, and Oprah Winfrey, and even CNN and Twitter itself. He has held the number one spot for quite some time. So, when Ashton Kutcher tweets that his wife Demi Moore has gotten a mohawk, people listen.

I know an awful lot of extremely physically beautiful people, yet, even among celebrities, Ashton Kutcher is so freakishly good-looking that I remember him being in the movie Reindeer Games, even though I don’t think his character had a name. And I think his part was so small it consisted pretty much of stumbling into a bathroom or something at the wrong time. So I stop and think about it and realize that I can’t come up with any other movie Ashton Kutcher has ever been in. I know he was on a TV series called That 70’s Show which ran for a long time, but I don’t even know what network it ran on. So I go and check IMDB and I have actually never seen Ashton Kutcher acting in anything other than Reindeer Games. Yet he is clearly up there at the top of Mount Celebrity. I’ve apparently never really seen him act, yet I know that he dropped out of a biochemical engineering college program to become a male model.

Ashton Kutcher has managed to parlay a certain kind of famous access into something far larger than most. He is a perfect spokesman for digital cameras and micro-blogging services because he has managed to commodify certain parts of his existence in such a flawless and innovative way that, in 2009, the rest of society is panting to catch up.

The Punk’d reality show Ashton Kutcher co-created with producer partner Jason Goldberg at Katalyst Films took the Candid Camera genre to a whole new level. By playing pranks on recognizable people, Punk’d made the viewer feel much more invested in the show; it made the show feel ironically more real and most of the punked celebs more humanized. Maybe this makes some sort of statement about the alienation of modern man and how so many people feel more connected to famous faces on television and online than their, err, IRL peeps. Punk’d was spoofed on The Simpsons as the show Chop Shop with the pranked person crying out anguished “Why would you do that?” in response to their car being chopped for the purpose of filming their reaction for reality television.

Why would Ashton Kutcher do that? To get paid? To become a powerful producer? To be feared? To amuse himself? To get MTV to foot the bill for expensive pranks he wanted to play? To be able to have people to play pranks for him? To come across as more of a man’s man and less of just a pretty boy? To become that special sort of celebrity of the new millennium where he is nominally a famous actor, but the real description is much more complex . . .

So anyway, it appears that Demi Moore would look really hot with a mohawk. But the widely-covered haircut is just a photochop (Chop Shop!) Ashton Kutcher posted to his Twitter via TwitPic. Most of the news covering Ashton Kutcher punking the news media with what is not the most convincing photo manipulation say that Ashton Kutcher actually photoshopped the image. Never mind that minutes after posting the chop with the tweet ” wifey just got a new hair cut what do you guys think? I love it”, he tweeted, “@mrskutcher I”m just playing baby but I think you’d look great with that cut”. Which apparently was enough to convince a large proportion of the news media that Demi Moore actually had gotten a mohawk hairstyle. Because the Punk’d guy would never play the prankster in such matters. And apparently some pundits have poor reading comprehension. Which is ironic, given how many serious think pieces I have seen about Twitter decreasing people’s aptitude to comprehend complex thoughts. How much more complex than j/k are they themselves capable of? And what makes them think Ashton Kutcher did that photoshop job? Surely someone, who can pay other people to do pranks for him, has people for that.

Posted by Amelia G on July 21, 2009. Filed under Blue Blood. You can follow any responses to this entry through the RSS 2.0. You can leave a response or trackback to this entry
Tags: beautiful, blogging, britney-spears, celebrity, demi moore, famous, hairstyle, jason goldberg, mohawk, mohawks, oprah winfrey, perez hilton, producer, punk, twitter