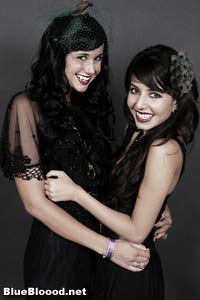 The recent Vampire-Con in Hollywood featured Vampirella’s Ball as the closing event. Comic book vampire Vampirella celebrated her 40th anniversary at the vampire convention, so I think it seemed only right to name the closing party after her. We have video coverage of the whole convention coming up soon, but the portraits we shot are exclusively from Vampirella’s Ball.

Forrest Black and I of course photographed Countess Lotti and Wendi Mirabella, the successful event mavens who made the whole weekend happen. Nella, who won the Vampirella look-alike contest kicks off our Vampire-Con photo gallery. We shot event MCs Count Smokula and the delicious Scarlet Rose (who also played a prostitute on my favorite Western of all time Deadwood.) You will find longtime friend of Blue Blood editor Pam Keesey in our portraits from the event. Other luminaries you will spot include gothic musician Andra Dare, horror actor Stephen Wozniak, and more.

I have to confess that the awesomest bit of our vampiric shooting adventure was most unexpected in context. This guy comes up to where the Blue Blood location studio is set up and he has kind of a long capsule intro. In Los Angeles, it is really really really a good idea to be able to state in a brief paragraph, while shaking hands, who you are and what you do and why who you are meeting should care. I suck at this on my own behalf. But I’m listening to this particular VIP guest of the convention give me his capsule intro and I am just racking my brain for where I recognize him from. At Blue Blood HQ, we sometimes call the frantic race to place someone as “work/TV/housemate of many years”. He has tremendous personal magnetism, piercing blue eyes, and the loudest blue shirt in the building, complete with rhinestones. So I’m mentally running through the face directory from the many conventions for internet professionals I have attended, spoken at, and exhibited at in my work for SpookyCash. No idea. 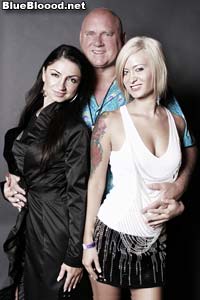 Finally he says his name and I’m just like OMG! Dennis Hof! If you’ve been living in a cave for the past gajillion years, Dennis Hof is the charismatic owner of Nevada’s best known legal brothel the Bunny Ranch. Forrest Black says that Dennis Hof is clearly a vampire because it just makes sense and, if Forrest were a vampire, he would definitely wear that shirt. Dennis Hof tells me that the Bunny Ranch can accommodate vampire roleplay for patrons. The two extremely sexy girls he has with him are a blonde Hayden Brooks and a brunette Phoenix James.

Dennis Hof says that Phoenix James is from Transylvania. I feel like a Transylvanian hooker is pretty much the ultimate accessory to bring to a vampire ball. Her bio says she grew up in Bucharest, but that is still Romania and close enough for rock and roll. And vampires.