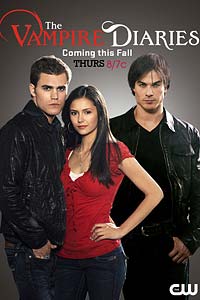 Vampire Diaries is most likely the single worst program I have ever watched an entire episode of. No close second place.

Longtime Blue Blood readers are probably aware that I find vampire legends so compelling that I wrote my thesis on how they function as a paradigm for human sexuality. You are probably also aware that I thought Twilight was great. I have no objection to either love or wholesomeness and most of the people who hate Twilight soooooooo much haven’t seen it. So the pain in my temples produced by watching Vampire Diaries had nothing to do with any problem with vampires being teen fare or not being sufficiently horror genre or anything like that.

Vampire Diaries sucks because, first of all, all the characters read too old to be in high school. It is impossible to keep track from casting, styling, or acting which characters are supposed to be younger or older than one another. They are all extremely poised, perfectly coiffed, and apparently have no parental supervision or annoyance of any kind. Their main hangout looks like a bar. The female characters all approach sex like aging cougar divorcees or at least very very very jaded twenty-somethings.

When I was in high school, not only did I run with a fast crowd, but most of us had diplomatic immunity and knew that there would be no legal consequences for our actions. Although I found Twilight’s approach to relationships refreshingly positive, I have no objection to teens drinking, drugging, and having either fabulous or poorly-managed sex in literature, but I prefer it be a bit, ya know, plausible. I was, in point of fact, legal to drink in most of the countries I lived in during high school and my friends’ favorite hangouts actually were bars. But, for a teen show, set in the United States, the main teen hangout should probably have set design which looks more like a Denny’s and less like a liquor establishment or, if it is a bar, that needs to be explained.

Adding to the weird anachronism of Vampire Diaries are the pop culture references. The most painful one is when one of the cougar teens tells another that her ex is clearly pining for her because he is acting cool on the outside (he’s not), but you just know he is continuously listening to Air Supply’s Greatest Hits. Air Supply‘s Greatest Hits. How hard would it have been to come up with something vaguely contemporary? I mean, I know Vampire Diaries is based on books from the 1990’s, but, for slightly past sappy lovesick music, surely the CW could have hired a writer who had heard of say Dashboard Confessional or Bright Eyes. I consulted the internet and Air Supply’s Greatest Hits came out in 1983. I’d like to say this is before any of the actors on Vampire Diaries were born, but some of them are really old to be playing teens. It is, however, obviously before any of the teen characters were supposed to have been born.

Paul Wesley, the male vampire romantic lead Stefan Salvatore, who was indeed born before Air Supply’s Greatest Hits was released, looks oddly like a misshapen Robert Pattinson, who played the male vampire romantic lead Edward Cullen in Twilight. He was obviously cast for the comparison, but the gambit doesn’t really work. He is a nice-looking guy and only looks deformed because of the context making it feel like he should look like someone else. He is also kind of beefy to make a convincing vampire. Or a convincing teenager for that matter. In all fairness, Vampire Diaries is based on books by L. J. Smith which predate the Stephanie Meyers Twilight Saga, so the execs at the CW could have chosen to riff less directly on Twilight.

The special effects are pretty hokey too, although more convincing than the teenaged status of any of the actors.

Full disclosure: Vampire Diaries advertised with a number of sites I work on. I probably watched the pilot in its entirety because of this and I definitely postponed mentioning its suckage until now out of deference to an advertiser.

I did think the posters and ad creative were really sexy though. There are still some big billboards up in Hollywood with some sexy photography and graphic design on them. So they have that and trending on Twitter every Thursday going for them.

Posted by Amelia G on October 1, 2009. Filed under Blue Blood. You can follow any responses to this entry through the RSS 2.0. You can leave a response or trackback to this entry
Tags: book, cougar, drinking, edward-cullen, fabulous, hollywood, horror, paul wesley, photography, robert-pattinson, romantic, stefan salvatore, teen, twilight, twitter, vampire, vampire diaries, writer