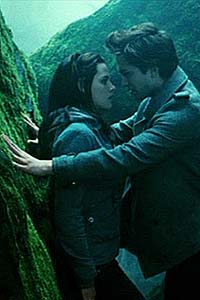 Twilight is out on DVD this week and, if you enjoy the tropes of cool sexy vampires, then Twilight is a fun watch. If you were just wondering whether or not to catch it on DVD or On Demand, then all you really need to know is that the movie has a pleasing cold color palette, nice-looking cast, interesting styling, creative quality directing, and a solid storyline with no plot holes and a satisfying ending. If vampires or lack of promiscuity or overwrought sexuality fill you with rage, then pass on Twilight, but otherwise it is enjoyable and hotter than I would have expected.

I admit that I would have enjoyed Twilight most between the ages of fourteen and fourteen. Yes, I know I said fourteen twice, but the target demographic for the movie is pretty specific. Realistically, the Twilight movie is probably aimed at girls aged twelve to nineteen, but it is just well enough done that it reaches beyond its core target demo. Not to put too fine a point on it, I think one of the reasons that vampires are so alluring to teen girls is that they are dangerously seductive, but they don’t put out particularly often. There is the aura of sexual excitement without the necessity to know precisely what to do with someone else’s private parts.

I wrote my thesis on Cross-cultural and Historical Vampire Legends as a Paradigm for Aggressive Human Sexuality. Keep in mind that I left home to go to school as a young jailbait teen. I found it startling that, all of a sudden, there were people around me who had this attitude that it was normal to have actual sex sex sexual intercourse with anyone they hooked up with. I was more of a go-getter than my peers in terms of acquiring the partners I wanted, but, even once I was entirely ready to have sex, I never got to the point where I wanted to have it immediately with someone I dated and I never got to the point where I wanted to have it with everyone I remotely liked. (This is inconvenient today, given that the circles I travel in include many people who treat fucking like a handshake i.e. a casual social interaction it is extremely rude and maybe even hostile to reject.) Heading off to university at sweet sixteen and being all hormonally hopped up, I was probably considered a bit of a menace to the people around me.

One of the aspects of Twilight which I think makes many adults respond in a viscerally negative way is its accurate portrayal of teenage female sexuality. I was more sure of what I did and did not want than the average teen, but sometimes the responsibility falls on the shoulders of the 100 plus year old vampire to say it is better to wait. One of the nicest scenes in the movie features Kristen Stewart’s Bella Swan and Robert Pattinson’s Edward Cullen making out in her bedroom. He pulls back saying he mustn’t lose control with her. She convinces him not to leave and they sit and talk and have an actual (if you will forgive the word choice) human interaction instead of just progressing to more physical intimacy.

Nonetheless, it is uncomfortable to realize that there are giant media corporations marketing sex to teenage girls. In the kickass opening episode for season 13 of South Park, episode 1311 “The Ring” brings up this issue to very comic effect. In particular, the Trey Parker-voiced Mr. Mouse who heads up Disney had me laughing out loud when he had to fly into Colorado to do damage control when the Jonas Brothers want to take off their purity rings. For those of you who, like me, had been blissfully unaware of the purity ring fad, the idea is to sell sexually stimulating media to young teens and then also sell them purity rings which are jewelry they can wear to remind themselves to be pure of heart and abstain from sex until marriage. In “The Ring”, when the Jonas Brothers want to take off their purity rings and make what they do just about their *cough* music, Mr. Mouse breaks it down for them, “You have to wear the purity rings because that’s how we can sell sex to little girls, ha, ha. See, if we make the posters with little girls reaching for your junk, then you have to wear purity rings or else Disney company looks baaaaaaaaad, ha, ha.” One of the many reasons the original Blue Blood magazine in print featured only real life couples doing what they would actually do on purpose in real life is that I think relationships are a good and desirable part of human sexual interaction. I hope there is some middle ground between romance-loathing, anti-relationship, indiscriminate swinging and the side-splittingly ridiculous drivel spewed on sites trying to sell teens cheap jewelry to be pure. So far my favorite comedy routine on a purity ring site is entitled, “The unimaginable consequences of Sexting”. Did I mention I’d love to see some common sense become more common?

Returning to the vampire motif in Twilight, why is this movie loathed by so many people who love them some True Blood, Interview with the Vampire, The Hunger, Near Dark, Lost Boys, and just about every other cinematic vampire ever created? South Park knows what is up once again. The brilliant season 12 finale of South Park, episode 1214 “The Ungroundable“, spoofed the pain of outsiders not being able to tell the difference between “goths” and “vampires”. I admit to knowing pretty much nobody, regardless of their actual subculture allegiance or tastes, who would claim self-described to be a goth or vampire, but South Park really did illustrate the issue there. 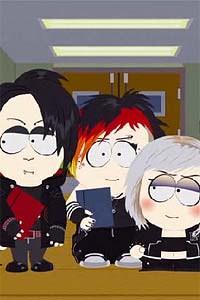 How does one react when something which felt like it was for you and your community suddenly become for other people? If a band you love becomes popular, do you stop listening to it when too many of its fans are people you feel could not understand the band’s message? Or say, if, for example, you and your friends have been having fabulous parties, reading obscure books, listening to obscure music, having creative sex, dressing flamboyantly, and producing media of your exploits, what do you do when a bunch of people with very different values start aping everything you do? Do you change and develop new interests or reject your own past? Do you reject the trendier portions of what is new? Do you examine which new media appears intended to destroy your culture and which new media is essentially a neighboring and perhaps friendly country?

The South Park answer is to burn Hot Topic down. Without inciting to riot, I’m comfortable with a rejection of Hot Topic because it seeks to destroy the very culture it serves; Hot Topic seeks to make the whole notion of enjoying gothic anything into some sort of teen fad that everyone is supposed to grow out of. Twilight just happens to be a teen fad and not one which its fans will necessarily all grow out of. Perhaps Twilight encourages abstinence, selectivity, or merely taking it slow, but I have trouble finding fault there, especially given the target demographic of teenage girls. I have not yet read the books by Stephenie Moyer which the Twilight movie is based on, but I do not believe that she or screenwriter Melissa Rosenberg from Dexter and The O.C. were trying to come up with a storyline which attacked gothic culture in general. (I reserve judgment until I’ve read the books and learned more about them.) I do not think director Catherine Hardwicke, whose previous directing credits include the controversial Thirteen, is hoping that having more people get into the whole vampire thing is going to be awesome for getting rid of gothic subculture. Prior to directing the edgy Thirteen, Catherine Hardwicke was primarily a production designer who worked on films from Tapeheads to Tank Girl. No surprise then that Twilight has such lovely aesthetics.

— Twilight is entertaining if you like vampires.
— Teen girls do have discomfitting sexuality.
— Vampires are sexy, doubly so to teen girls.
— Purity rings are laughable, but abstinence and selectivity are not bad.
— South Park is sometimes very funny.
— Hot Topic sucks, seeking to make gothic culture juvenile and disempowered.
— Twilight invites everyone to enjoy a darker aesthetic.
— Twilight is out on DVD and On Demand now.

I’ll get back to y’all at such time as I develop a more complex opinion of Twilight.

Posted by Amelia G on March 29, 2009. Filed under Blue Blood. You can follow any responses to this entry through the RSS 2.0. You can leave a response or trackback to this entry
Tags: abstinence, edward-cullen, goth, gothic, kristen-stewart, purity-rings, robert-pattinson, sex, south-park, twilight, vampire, vampire-porn, vampires