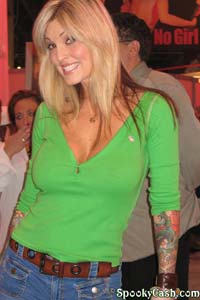 Everyone in Los Angeles has been getting sick. It is this horrible bug which seems to repeatedly seem to improve and then relapse and tends to turn into pneumonia. It is bad enough that the touring group for this season of American Idol was largely decided on the basis of who could sing best through a sore throat. It seems like almost everyone I know has had this thing. I am no exception and yesterday was my first full day back at work, after like a month. For a workaholic like myself, no matter how much I’ve automated large portions of my business, being too sick to work a full day is pretty much torture.

Today, I have been reviewing what has gone on in the world for the past month. Apparently, the news is all OMG DOG BITES MAN. The “news” that Ricky Martin says he is gay was so blockbuster that it took down his webservers. Unless I get to personally watch Ricky Martin fuck, I’m more interested in the fact that Livin’ La Vida Loca and She Bangs are two of the best songs ever to shake an ass to.

I know I’m late to comment on the Tiger Woods absurdity and South Park has thoroughly and eloquently covered the topic with Sexual Healing, but seriously, that was news? News bulletin: Sometimes rich and powerful country club dudes marry the sorts of women who make good mothers and hostesses and still bang the occasional cocktail waitress or hooker or rebellious college student on the side. This has been the case like since the invention of rich and powerful dudes. The wife or queen or whatever would probably prefer not to have her face rubbed in it or be asked about it by reporters or have everyone know, but, if your partner is a wants-crazy-specific-sex-with-different-people-a-lot person, you just know.

Speaking of which, as a result of the Jesse James “news”, my cell phone messages voicemail got full last week and my email, texts, and various SNS and chat applications all blew up with folks wanting to get photos of girls who banged Jesse James and quotes from me on the topic. It is true that I have a database of probably thousands of tattooed girls willing to get naked and some of them would undoubtedly sleep with a reality show star (like Jesse James) or a paid dude (like Jesse James) or a hot guy with nice tattoos (like Jesse James). I’d like to say that none of the inked up hotties I know would sleep with a married guy, but I sadly know that is not true. I’d like to say that I’ve never met a good-looking girl with tattoos who would sleep with a guy with Nazi collectibles, but I’ve paid to retouch enough WWII regalia out of ink and clothing in photos that I know that is not true. However, to the best of my knowledge, I have not photographed anyone who has had sex with Jesse James recently.

So, although we know a lot of people in common, I’ve only met Janine Lindenmulder a couple times for a couple of seconds. My only experience of Jesse James is watching part of the season of Celebrity Apprentice which Annie Duke should have won, but which was rigged for Joan Rivers. IMDB says Sandra Bullock has been in 44 pictures, but I’ve only seen her in Crash, Murder by Numbers, and the first Speed movie. I’ve never gotten the Sandra Bullock appeal. I once asked Blue Blood spokesmodel and writer Sarah McKinley Oakes what it was she liked about Sandra Bullock and she screamed at the top of her lungs, “HER FACE JUST MAKES ME FEEL GOOD, OKAY?!” So she’s obviously got something special going on, even if whatever it is does not resonate with me. I guess Sandra Bullock was in Demolition Man as well, but I don’t recall her performance in that. Don’t get me wrong, I’ve never seen Sandra Bullock in anything where she did not do a good job; she just never stood out or struck me as exceptional or crazy hot.

And, with the disclaimer that I have no real inside knowledge of the personal lives of Janine Lindenmulder, Jesse James, or Sandra Bullock, here are my thoughts, as so many have asked: If Jesse James is on his third marriage and left Janine while she was pregnant with his child, no matter whether Janine deserved it or not and whether or not rumors that Sandra Bullock is pregnant now are confirmed, what made Sandra Bullock think he was a one woman man? Certainly members of the Greatest Generation believed that you marry one kind of girl and you have crazy sex with another and Jesse James seems a bit traditionalist in worldview. Supposedly, various people are selling their story to tabloids with “surprising” details like Jesse James enjoyed big titty girls with tattoos. Well, knock me over with a feather.

So apparently the only non-Captain Obvious thing which happened in the past month is that a “healthcare reform” bill passed, only it doesn’t matter if it sucks because it is not set to take effect until 2014, by which time it will probably be knocked out anyway. I’ll write more on that later.

For now, let me say that I like that Casey James guy on American Idol because he reminds me of being fourteen, although I think anyone who thinks he is available needs to take note of the fact that men don’t usually renovate a little Southern house lovingly by hand, unless they have someone to put in it. Tim Urban deserves the Most Improved Camper award and I thought it was unfair for American Idol to have him be coached by Miley Cyrus and then have the judges complain that his strong performance was too Disney or Zak Efron. Of this year’s contestants, Tim Urban probably has the most desirable career ahead of him and he looks like he is willing to earn it, which I respect. I suppose I’m expected to like Crystal Bowersox (if I’m expected to watch American Idol at all), but, although I enjoy lesbian coffeehouses, she strikes a false chord for me and seems way too financially-motivated and unoriginal to be the second coming of Janis Joplin by any stretch of the imagination.

So, in conclusion, rich, famous, and/or powerful men sometimes get a little sex on the side. Sometimes someone everyone thinks is homosexual is homosexual. If Washington, DC calls something “healthcare reform”, you can be certain it is neither. Rich, famous, and/or powerful men, who have a history of going from woman to woman, usually go from woman to woman. American Idol has some moderately appealing contestants.

They say no news is good news, so hopefully that is true. I’m going back to bed.