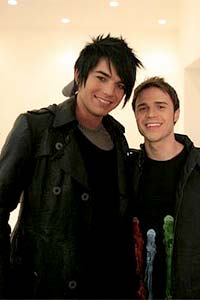 If you are alt-identified, yet want Kris Allen to beat Adam Lambert in this week’s American Idol finale, then you are complicit in your own oppression. Rebels who want Adam Lambert to lose must just hate themselves.

People like to fuss about sex and sexuality, but the place where Adam Lambert is actually unusual is that it is rare to see new musicians with serious larger-than-life star quality in the spotlight today. I just watched a top 20 video countdown and Eminem was just about the only one who would turn heads in a room he walked into, on force of presence alone. So it is exciting to see someone who has the right counterculture vibe with a mix of subcultures gothic, punk, hard rock, rockabilly, emo, scene and more blended together for something unique and compelling. To anyone who states people like Adam Lambert are a dime a dozen and FOX is just not in-the-know, I have to say there are a lot of people with some of that general sort of style, but not a lot with that vibe and that level of both charisma and musical talent.

To receive the same kudos as someone who comes across more normal and mainstream, I often feel like I have to work at least twice as hard and produce work which is twice as good. I would be fine with this, except for the part where the whole process plateaus early. Allow me to explain. In a way, simple badges of flamboyance and theoretical nonconformity, such as tattoos or unnatural hair color, have become fairly common by 2009. Someone who truly has an artistic and offbeat spirit is still likely to have to be better than the next guy to achieve the same recognition. Unfortunately, people, who identify as somehow alternative or creative or freaky, tend to want to root for the underdog. This means that, as soon as one of their compatriots is about to come over the top and succeed for real, they get an enormous backlash from former supporters. So I see all these people, who were super excited by Adam Lambert’s early successed on American Idol, who are now not into him because he is perceived as the obvious front-runner; they think maybe they like the other final two member Kris Allen because he is the underdog.

Kris Allen is an appealing enough performer. In particular, I liked his performances of “She Works Hard for the Money” and “Heartless”. I most likely would not flip the channel if a music video of his came on. I actually think American Idol fans got it exactly right for the AI8 final two to be Kris Allen and Adam Lambert. (Alison Iraheta might be more demographically similar to Adam Lambert, but Kris Allen is a more ready-for-primetime performer.) Kris Allen is not the underdog to win this contest because he is somehow disadvantaged and just needs a little love and support. Kris Allen is not some sort of stray 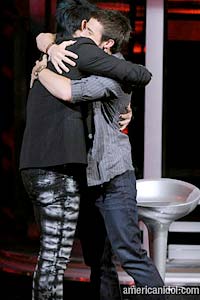 It seems like if Simon Cowel, Paula Abdul, Robert Plant, Bono, Slash, Katy Perry, and a host of other notables all feel strongly that Adam Lambert should win American Idol, then he should be a shoo-in sure thing. But he is not. The reason he is not is that inexplicably hot people with smudgy eyeliner and leather jackets and big boots hate themselves. Now nonconformity does tend to get push-back from the overculture, so I understand why many bohemians do not necessarily expect to always get praise. Getting praise, however, does not mean that you lose your individuality merit badge. You should expect to be able to win people over, when they see what you are really like.

No disrespect at all to Kris Allen, but Adam Lambert deserves to win American Idol. Adam Lambert earned the win. I know, I know, rebels figured out that 19E and the powers-that-be want to have Adam Lambert win, so it would be (oi oi) rebellious to vote for Kris Allen instead. A good rebel is ready to take the power, not just cry like a baby over whoever seems to be an authority. Voting against Adam Lambert is not sticking it to the man; it is just building a glass ceiling for your tribe. Hopefully Wednesday night still ends up being a coronation for Adam Lambert.

Posted by Amelia G on May 18, 2009. Filed under Blue Blood. You can follow any responses to this entry through the RSS 2.0. You can leave a response or trackback to this entry
Tags: adam lambert, american-idol, conformity, counterculture, elvis, emo, gnr, goth, gothic, kris allen, led zeppelin, punk, rockabilly, sexuality, slash, twitter