Rolling Stone is known for its decades of quality photography and occasional envelope-pushing magazine covers. The brilliant Matthew Rolston shot Alexander Skarsgård, Anna Paquin, and Stephen Moyer in a variety of menage-a-trois scenarios. I would say some of the inside photos look surprisingly stiff for someone of Matthew Rolston’s caliber, but, in all fairness, Skarsgård has been surprisingly stiff the current season of True Blood. Alexander Skarsgård is one of my favorite actors, and I usually find him immensely charismatic and believable, no matter what the role is. I think maybe he is just really really really not into doing dudes. On that topic, if True Blood is going to have lots of man-on-man action, I wish Nelsan Ellis, who plays goth fry cook/drug dealer Lafayette on the show, looked like he was enjoying the gay sex scenes. But the Anna Paquin and Stephen Moyer sex on that show is still pretty much the best coupling ever shown on television. In the True Blood interviews inside the magazine, show creator Alan Ball is pretty balls out in what he has to say. And that Matthew Rolston shot of the stars of True Blood nude in corn syrup blood on the cover of Rolling Stone, it is mighty nice to see. 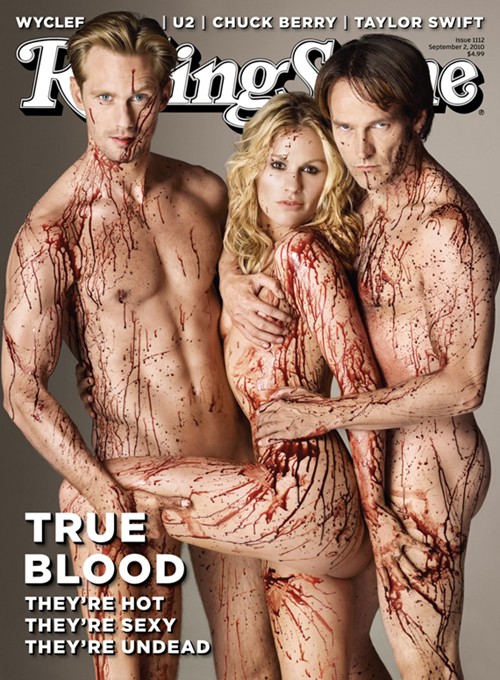 Posted by Amelia G on August 25, 2010. Filed under Popcorn. You can follow any responses to this entry through the RSS 2.0. You can leave a response or trackback to this entry
Tags: actors, alan-ball, alexander-skarsgard, anna-paquin, gay, goth, lafayette, magazine, matthew rolston, nelsan ellis, photography, photos, rolling stone, stephen-moyer, true-blood