So, a funny thing happened after I wrote the article Girls Entitled Hipster-Wannabe Sex and the City Suckage on HBO. I got some hate mail about how I didn’t understand that this was about authentic women’s experiences. Guess how much of that was from women who felt Girls reflects their personal authentic experiences. Did you guess zero? If you guessed that exclusively men have contacted me to tell me how I am a bad feminist, that would be correct. I find this kind of hilarious. Gentlemen, if you think you are a feminist, but your view of women is that, even a college-educated woman is intended to go from her parents care into the care of a man, without ever being able to take good care of herself, then you need to check yourself. Wanting to take care of the little lady might be chivalrous, but, if you look down on women, while taking care of them, you are not exactly Captain Feminist.

I, of course, have not watched this wretched excuse for a show since enduring the pilot. Aiden Starr tells me that she saw the second episode and the attitudes about sexuality and sexually-transmitted disease and the role of women pretty much made her head explode and she was pissed off to have Girls ruin the good mood Game of Thrones had put her in.

Which bring us to the previews for Girls episode 3. I can avoid watching that horrible show, but I can’t easily avoid the previews while still watching HBO. The self-absorbed unlikable main character in Girls has a gothic style moment in episode 3. It is of course the weekend warrior big eye makeup and mousey brown hair goth look variety. There was a time when network television never showed people of color as actual characters. Oh, a black person or an Asian could play the role of a servant and hand someone a hairbrush or a sentence of wisdom, but nobody whose character name you would remember could be darker than white white white. This is generally the case today with characters who are gothic, punk, tattooed, counterculture, bohemian, or whatever you want to call it. We are supposed to be so thrilled at being recognized as existing that it doesn’t matter if our lifestyle is treated as a phase or our values are disrespected or the alt-y characters are imbeciles. Yes, I know that there are lots of unattractive characters on Girls, with or without bad gothic makeup. But, with the existing dearth of sympathetic counterculture characters on either network or cable TV, it is extra annoying to see tokenism in Girls. Then again, I’ve seen a number of writers pointing out that the lack of black or Asian characters on Girls is bizarre, given the demographics of the places in New York where the show ostensibly takes place. (No, the girl who got the job after her internship for knowing Photoshop does not count as a minority character.)

(1) Actual women do not feel this show reflects their authentic experiences. Only secretly sexist guys think this.

(2) This show handles sexuality in a repulsive and irresponsible way.

(3) Tokenism is offensive and Girls engages in it.

HBO’s Girls sucks. There are so many stories in New York City, I am appalled that someone with a choice chose to tell this one. 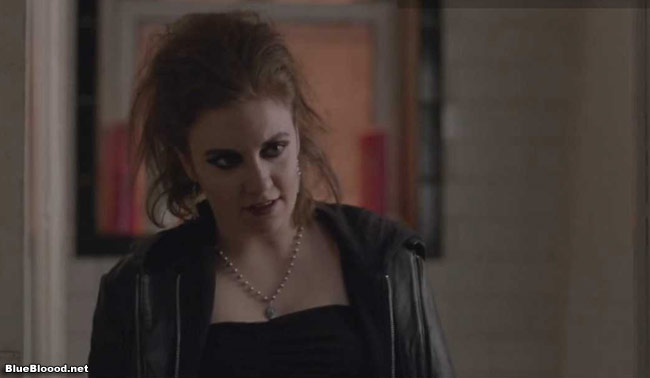 Posted by Amelia G on May 6, 2012. Filed under Headline, Popcorn. You can follow any responses to this entry through the RSS 2.0. You can leave a response or trackback to this entry
Tags: aiden starr, feminism, feminist, girls, gothic, hbo, hex, new-york, sucks