Gothic.Org just posted a feature article on Pete Carter’s Ghoulmaster’s Haunted Playhouse Kickstarter. He loves Halloween and has tons of dark style and guyliner and even wrote an ode to those vital cosmetic basics black lipstick and eyeliner. One of the Kickstarter rewards features some of those song lyrics in black crayon. The incentives are creative in general and include some neat exclusive props and some good-looking T-shirts. Pete Carter himself has remarkable style. He stars in the show, he directs, he produces, he designs the makeup, etc. Blue Blood always likes to support those DIY values and worth ethic. Also, there are hot outfits and puppets. I hope his new show does fabulously well. Just watching his Kickstarter video is entertaining. 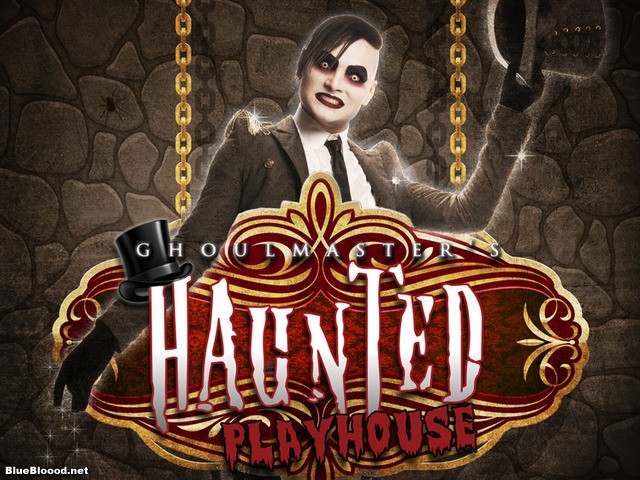 Hi, I’m Pete Carter, creator and director of “Ghoulmaster’s Haunted Playhouse”. I’m a professional Michael Jackson tribute artist and have been performing around the world for the past 13 years. For the past five years I have created and produced a live stage show for Six Flags Fright Fest called Ghoulmaster’s Ghosts. I, myself, have taken the position of writer, director, choreographer, performer, set designer, prop builder, costume designer, photographer, graphics, video editing, special effects, and make-up.

In 2014, I moved to Los Angeles with a nightmare. I dreamt of a theater experience like no other. As if you just walked onto the set of The Munster’s or The Addams Family and Michael Jackson’s Thriller and Ghosts videos came to life in your face. Just add some sexy ghouls, rock ‘n roll, glamour, cobwebs and glitter, and you have Ghoulmaster’s Haunted Playhouse. A celebration for those of us who choose to live the Halloween lifestyle all year round. A celebration of acceptance and living your life for YOU!

With “Ghoulmaster’s Haunted Playhouse” I hope to bring the message of acceptance, anti-bullying, and living your life for yourself. I’ve just always felt that we all have such a small amount of time on this Earth, and we need to have fun, be weird, love each other, love ourselves and don’t worry about what others are saying or thinking. Ghoulmaster’s Haunted Playhouse is going to be that escape for so many people.

“One person’s craziness, is another person’s reality” – Tim Burton

Ghoulmaster’s Haunted Playhouse can best be described as Pee Wee’s Playhouse meets Rocky Horror Picture Show. The one and only Ghoulmaster welcomes you into his world for a spooktacular night of dance, magic, music, comedy, special effects, and burlesque! An unforgettable, frightening, intimate theater experience not for the faint of heart! Sexy ghosts, hilarious ghouls, and mind blowing special effects. A PG-13 visual feast for the eyes!
WHO IS GHOULMASTER?

If Count Dracula was an eccentric 80’s pop star- you’d have Ghoulmaster. A mysterious immortal being whose main goal is to scare, shock, and awaken the senses. The King of Halloween, Horror Royalty- he controls all the ghouls, the ghosts, and the goblins- releasing them upon us every year on Halloween. Ghoulmaster is an intriguing, androgynous, goth superstar with an ego and attitude to match. He’s known for his outrageous costumes often involving corsets, platform boots, top hats, leather and chains. One of his signature features is his long pointed tongue. He lives in a beautiful decaying Victorian mansion with an unforgettable cast of characters.

“The suspense is terrible… I hope it’ll last.” – Willy Wonka

If you love Halloween, vintage Hollywood horror, make-up, costumes, puppets, and BLOOD- you are in for a treat, and more than a few tricks! In Ghoulmaster’s Haunted Playhouse, it’s a constant costume party. The audience will be encouraged (REQUIRED!!) to wear costumes and become part of the show! Dress Code: The stranger, the better.

“I mean, if you have a hunchback, just throw a little glitter on it, honey, and go dancing.” -Party Monster

Posted by Amelia G on July 2, 2014. Filed under Headline, Music, Personalities. You can follow any responses to this entry through the RSS 2.0. You can leave a response or trackback to this entry
Tags: black, corsets, costume, costumes, director, eyeliner, ghoulmaster, glamour, guyliner, haunted, horror, kickstarter, pete carter, victorian