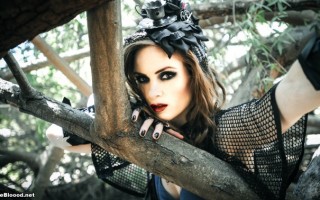 
Back before the internet, I assumed that, when I got to the point where I needed a large number of regular artistic collaborators, I would need a big office. I personally tend to keep a somewhat nocturnal, but mostly pretty varied schedule. And so do most creative people I know. And the internet facilitates easy […]


Over at Albertine and Odette, my good friend (and Blue Blood hottie) posted some new accessories for men from Givenchy. She threw a fabulous Recession Potluck and Govinda Coloring Party this weekend. Nobody throws an event like she does. So, if I know anyone who will have the gents getting decked out in gimp couture, […]

What do you think of child beauty pageants?


Last night, I was fortunate enough to have dinner with a motley crew of interesting creative people. One of the artists there, who I had not met before, was photographer Susan Anderson. Her book High Glitz has just been published by Powerhouse. According to the Powerhouse site, glitz is a subgenre of kiddie beauty pageant […]


Sometimes I feel like I am just on vampire time. Something will be on my to-do list and I’ll feel like darn-it-some-time-has-passed. Only it will be more time than seems possible in my gut response. Anyway, it has been on my to-do list to bring you all more fashion coverage on BlueBlood.net. So I’m going […]