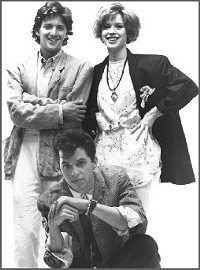 I never trust any woman who lists Sixteen Candles as one of her favorite movies.

The most fundamental flaws with society today can all be traced back to 80’s teen movies, specifically the work of John Hughes. I hoped, when I moved to Hollywood, that I would someday get the opportunity to tell him so in person. I’ve been here a while and haven’t run into him yet, so I thought I would post it on a nice busy site and wait for him to find it while ego-searching.

The message of pretty much all John Hughes movies is that you should hate successful people, while coveting what they have and having the exact same sucky values that the people you hate have. If you hate someone, why would you aspire to be like them? I understand that sometimes one can take a wrong turn in life, but who actually wants to become something they themselves hate?

Let’s start with The Breakfast Club. Although Sixteen Candles and Some Kind of Wonderful are so much worse, I’m going to try to go with chronology. The basic conceit of Breakfast Club, for those fortunate enough not to have seen it, is to place a group of dissimilar and unrealistically stereotyped students in a room where they are not allowed to leave and see how it all turns out. The results are an implausible and thoroughly unjoyous exersize in unhelpful group therapy. Anthony Michael Hall’s character blubbers and actually gets sympathy from fellow high school students trapped in detention with him. Molly Ringwald’s character takes the poetic and sexy character played by (much hotter) Ally Sheedy and gives her a makeover that would qualify her to play the ugly friend. You know how lots of pretty girls like to have an ugly friend to go places with them, prop up their low self-esteem, and cock block as needed? Yeah, like that. Emilio Estevez (who is great in every other movie role) did Breakfast Club fresh off the classic, brilliant, unconventional flick Repo Man, which is still one of my favorite movies to this day. Estevez is supposed to be the jock with, if memory serves, a violent abusive father (although that might have been Judd Nelson with the psycho dad) and it only takes one day in a room with losers for him to pour out his heart that he is suffering and not all that. Judd Nelson is not even hot as the long-haired stoner who Molly Ringwald makes out (totally unerotically) with. I have now saved you all from the miserable fate of having to actually watch Breakfast Club to find out what it was all about, except for the ending. At the end, these five totally different people with totally separate social lives, who are supposedly high school students, agree that the day is not a beautiful and transcendant moment, but rather a complete change in all their lives. Yeah. That makes sense. Just misbehave on the same day the prom queen has detention and you will totally get to be her boyfriend. Does anyone actually identify solidly as Prom Queen, Jock, Stoner, Geek, or Psycho, with a capital letter, in high school? I know I didn’t, although I sure spent a while trying to determine which I’d been, after I saw John Hughes movies. (I saw them quite some time after they came out.) 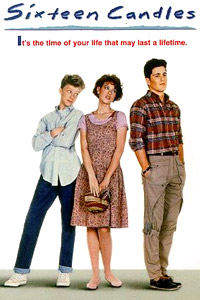 Sixteen Candles is really really nauseating, but easier to summarize. Molly Ringwald plays the dorky unpopular girl in this movie. There is this guy Molly Ringwald’s character likes. But the problem is that her crush has a popular girlfriend. Only you are supposed to hate the popular boy’s girlfriend because she is pretty and she knows it and she cares about social status and that her boyfriend is good-looking and from a family which is financially well-off and she expects her boyfriend to pay attention to her and treat her with respect. The upshot of this is that the loser girl blows off someone who is hot for her but not popular, and goes after the popular boy, even though he has a girlfriend. The girlfriend ends up getting her hair cut off by a drunk person because her fickle boyfriend isn’t there to take care of her. So this pouting little girl, who resents her own sister getting attention for her wedding and who has spent the whole movie expecting the world to stop turning on its axis because it is her birthday, well, she steals the other girl’s boyfriend and you are supposed to cheer for her. Maybe because it was supposed to be a longshot for her to get him? Even though she looks like Molly Ringwald. Underdog or not, however, the unpopular girl still has the exact same terrible values as the popular girl. She doesn’t know the dream guy’s soul. She also cares about social status and that her crush is good-looking and from a family which is financially well-off. Shallow-a-rama. There is also some racist humor sprinkled through the movie. Ew. 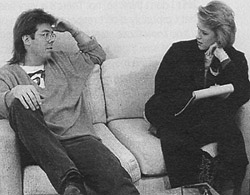 Pretty in Pink is also dismal and equally easy to summarize. Molly Ringwald plays the funky unpopular girl in this movie. There is this guy Molly Ringwald’s character likes, but he is rich and popular. The upshot of this is that the loser girl blows off her really cool and supportive friends, one of whom has been into her forever (played by a very appealing Jon Cryer), and goes after the popular boy. I don’t remember if he has a girlfriend already, but he probably did. They all did.

I don’t remember the distasteful Ferris Bueller’s Day Off that well, other than that the normally charming Matthew Broderick plays a guy who is totally horrible to his friends and destroys his friend’s father’s Ferrari. This is supposed to be good because in John Hughes Teen World, anyone who has something – girlfriend, boyfriend, car, etc. – deserves to lose it.

This discussion would not be complete without eviscerating Some Kind of Wonderful. Eric Stoltz plays a boy with artistic inclinations and a desire to . . . wait for it . . . get with the good-looking popular girl. So he does what any intelligent person would do and takes his college tuition money and spends it on renting the Hollywood Bowl and buying a set of diamond earrings and assorted other sundries intended to impress the popular girl played by a very young and cute Lea Thompson. (Molly Ringwald turned down the gig, apparently much to the enragement of one John Hughes.) Mary Stuart Masterson plays the tomboy best friend of Eric Stoltz’s character. There is a twist in this John Hughes movie because the popular girl is not actually rich, although her boyfriend is. So the upshot of all this is that Lea Thompson’s character shoots the boy down and gives him back the diamond earrings his tomboy friend helped him pick out. So now he can go to college, right? Wrong. Now he gives the earrings to his best friend and it turns out she is shallow and materialistic and was hoping to get them for herself the whole time she was shopping with him and pretending to be a good friend. The movie closes with them walking off together into the night and Eric Stoltz ‘s character telling Mary Stuart Masterson’s that she is wearing his future. Hello? If this girl is the one with good values who doesn’t just care about money and social status, then surely she would want the man she loves to be able to get an education and enrich his mind, more than she would want diamond earrings? Apparently not.

Oddly, I just popped over to IMDB and, while I’ve mentioned the teen movies people generally associate with John Hughes, he also wrote and directed Weird Science which is a much more light-hearted flick where the characters are much nicer to one another. Go figure.

People often speak reverently of John Hughes, of how much he had his finger on the pulse of the 80’s. I think that gives him both too little credit and too much. I don’t believe people were really the way he presented them, venal and shallow and differentiated only by haves and have-nots. However, the appalling values of his most popular teen movies now afflict us as a culture because they were so influential on young minds. So a lot of people now feel like it is normal and just behavior for a have-not to complain that a have is materialistic and lacking in depth, yet these same people are materialistic and lacking in depth.

In case y’all were wondering, I don’t think people should be forced to feel bad for being successful, but I also can’t stand shallow people who are always trying to check out someone else’s wallet. Don’t covet what your neighbor has. Grow some self-esteem and work on both who you are as a person and more tangible success. And, Mr. Hughes, I hope you’ve made enough moola by now to stop envying the boys with the nice cars who can get the pretty girls.