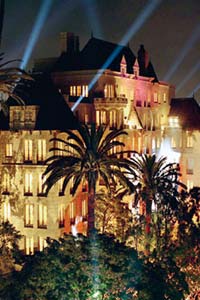 You know how all 80’s teen romances featured a girl the hero wanted. And you know how that girl was always romanced by some guy with a sort of overdone Kennedy scion kind of haircut, a Porsche or similar ride, and generally some country clubbish or yacht-person sort of clothing? Well, apparently whoever made the introductory Scientology film didn’t get that viewers were supposed to want to be John Cusack’s Lane Mayer in Better Off Dead and not Aaron Dozier’s ski champion Roy Stalin. It’s like rooting for the nameless college guy in the red sports car over Ilan Mitchell-Smith’s Wyatt Donnelly in Weird Science. Weird Science is apt here. More on this in a moment.

So I went to the Scientology Celebrity Centre for brunch yesterday. The building is beautiful and blocks from my house. (I had a friend pick me up in his BMW SUV because, when it came down to it, walking didn’t feel Hollywood enough for such a Hollywood moment.) Food was varied and pretty tasty. Service was friendly and adequate, but unexceptional and could have been mildly more attentive. I particularly liked the crisp waffles and the smoked salmon and capers. The regular water was excellent for Los Angeles, so they must have a good filter, and the orange juice was good enough. Say you saw the brunch in the internet and it is a discounted $25 a person for all you can eat, rather than the walk-in price of $30 a plate.

I had a good time because I went with friends. I will refrain from naming said friends, due to their general nervousness about the establishment in question. Now I have lived blocks from the Celebrity Centre for years and, after my recent Scientology sign maker widget post got such a surprising amount of attention, I thought I might want to actually check it out. So I made a brunch reservation for three people and invited seven or eight of my friends. One person who declined pointed out that perhaps the week a dude with Samurai swords got shot by Scientology security guards in the Celebrity Centre parking lot was not the best timing to extend such an invitation. (I later looked this incident up online and noted that it apparently actually took place in November of last year and not this week at all.) Only one of my pals had the good excuse of being en route to attend the Barack Obama presidential inauguration. Everyone else plead hangover or terror or similar. At any rate, my friends came through for me and exceeded expectations and we ended up being a party of four. The grounds were lovely and we were seated facing indoors, beneath a hand-painted ceiling, by a window facing a garden fountain. There was a kind of terrible easy listening cover band outdoors, but we couldn’t really hear them where we were at. Because the company was terrific and the food was yummy, we had a great lunch.

The Hollywood Celebrity Centre was initially a sort of artists hotel, from the time most noir novels are set, when people would regularly rent hotel rooms by the week. Because of the building’s beauty and history, one of my friends found someone to ask if we could take the tour I’d heard they had. A room where Errol Flynn stayed was quickly pointed out and the gentleman we spoke with also mentioned that Cary Grant had stayed upstairs. Then he ushered us briskly through a hallway, which had at least a few somewhat interesting maxims framed on the walls, and into an office where we were given little questionnaires to fill out. I found it kind of hilarious that the questionnaire included a question about whether one had heard of Scientology. I asked the manager guy we’d been introduced to how many people sitting in that room wouldn’t have? Maybe it is a multipurpose form, but a little customization would seem a lot less silly. The form also asked how I had heard of Scientology and had a long list of boxes I could tick. I made my own box and checked my write-in answer of “Live in Los Angeles”.

One of my friends asked the manager guy where his accent was from and he said Sweden. As both one of my friends and I had been to Sweden, we chatted about that a little. We told him we were a bit pressed for time but had about twenty minutes available for a tour. The Scientologists assured us twenty minutes would be fine and ushered us into a nice little screening room to watch a movie which would answer many of the questions we might have about Scientology. I wouldn’t mind having their comfortable screening room, but they miscalculated wildly with their recruitment movie.

First off, the movie shows incredible footage of spectacular Scientology buildings, including a castle in the UK used as a school. It then immediately cuts to a diatribe against materialism. Uhm, poor segue. Most importantly, all four of us work in some aspect of the entertainment industry in Los Angeles. We pretty immediately became impatient with the recruitment film’s uber-beginners approach for morons. Instead of saying much about Scientology philosophies, such as those framed on their hallway walls, the film was incredibly defensive, going on and on about how it is too a religion and quoting court decisions from multiple countries. The flick drones on interminably about how Scientology is attacked by psychology and government because it is a good replacement for government mind control. Or something like that. They really failed to communicate their value proposition. They would have done much better by actually giving us a tour where a properly trained tour guide could have gauged each of our levels of interest, knowledge, and intelligence.

Most comically, the Scientology recruitment flick had a Troy McClure who really came across like the 80’s movie preppy jerk in the Porsche who treats the female lead so shabbily. I mean, I think tie pins under the tie knot are kinda pretty and I wouldn’t mind if they came back in fashion. But they really haven’t.

Finally, we nominated one of our party to go ask when the actual tour was going to start. They apparently didn’t have enough tour guides to start immediately or something and the movie droned on, so we got up and left. On the way out, the Swedish manager came out to speak to me, perhaps guessing that I had asked for the tour hoping to find something more meaningful and intriguing than dated prep haircuts. I asked him when the movie was made. Without hesitation, he started to say “eighty-” and then cut himself off, paused, looked up and away, and said, “uh, ninety . . . ninety-five.” It is possible that they did some sort of re-edit in 1995 where they added a building acquisition to the beginning or added a postscript to the end, after the badly-acted repetitive part, and we just didn’t sit through enough of it to see the post-1986 part.

So here is my free consulting advice to Scientology: Make a new recruitment movie more often than once every twenty years. If the Church of Scientology would like further media consulting, my rates are available via the contact form on this site.

Fun fact to know and share: Ilan Mitchell-Smith, who played the cute dork who gets the girl, Wyatt Donnelly, in 1985’s Weird Science, pursued a course of medieval studies and is now a professor of English. That’s hot.

I’m not sure modern social science has an explanation for how John Hughes could have done a movie as fun and positive as Weird Science and then done all the wretched values-destroying propaganda he did afterward, so maybe Scientology can trump psychology there and come up with a plausible explanation.

Posted by Amelia G on January 19, 2009. Filed under Blue Blood. You can follow any responses to this entry through the RSS 2.0. You can leave a response or trackback to this entry
Tags: barack-obama, celebrity, hollywood, ilan-mitchell-smith, inauguration, john-cusack, john-hughes, medieval, obama, scientologist, scientology, troy-mcclure, weird science