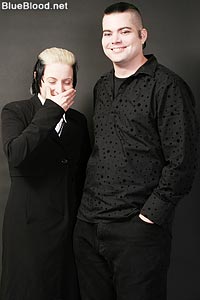 Corporate Goth is a familiar expression in East Coast cities where people tend to separate their playtime from their workdays. I was living and working mostly in Washington, DC and Baltimore when I founded Blue Blood in print. I did primarily contract design work and most of the companies I worked for were conservative federal contractors, management consultancies, and lobbyists. My hairstyle at the time consisted of only natural colors, albeit definitely not colors which would appear striped together in nature. On my own time, I believed that shirt was spelled L-I-N-G-E-R-I-E. Heck, one of my neighbors harangued me from across the street, telling me I belonged in a whorehouse for what I wore just to clean my car. (I called the cops on her.) But, when I was seated at a computer in someone else’s place of business, I might not have looked like the most standard employee (or contractor). My clothes might have tended towards a darker palette and my hair was not really a businessperson’s cut, but it was usually businesslike enough. (When I worked at EDS, my manager did complain to my agency about my sexy stockings.)

This might go without saying, but I’m going to state the obvious here: I read a lot of cyberpunk at the time. I loved William Gibson and John Shirley and Richard Kadrey and Norman Spinrad and Pat Cadigan and Walter Jon Williams and George Alec Effinger and of course Bruce Sterling’s Mirrorshades anthology was seminal. The list goes on, but one of the salient points of the emerging cyberpunk genre at the time was that it acknowledged both street culture and corporate culture. Cyberpunk was, in many ways, first and foremost a sociological study of how the human need for tribalism might manifest itself in a future with new technology.

So there were the heavily modded post-human gothic and punk tribes with writhing tattoos and tusks and animal muscle grafts and music implants in their ear drums. But there were also the sleek corporate melds of gangsterism and business core values. I don’t know how it was where you lived, but, where I was, both styles had a real appeal to counterculture people striving to achieve their personal goals and power, despite preferences for rebellion and individuality and flamboyance. This is where Corporate Goth comes from. The whole steampunk fashion thing sort of built on and evolved from some of this scene as some of the cyberpunk authors started writing steampunk and Neal Stephenson burst onto the scene. But the evolution of steampunk is another article.

In Los Angeles, many of the sleek black business stylings of corporate goth are just dressed for a certain sort of meeting. This is aesthetically pleasing to me, but it removes some of the tribal appeal.

Xian (pronounced “zigh-ahn” despite my stupid left hand always trying to add a letter t) Vox is not your typical Los Angeles promoter and DJ. She is interested in varied philosophies and works tech industry day jobs. So it sort of makes sense that she would like a corporate goth theme. A much smaller percentage of Los Angeles denizens who like spooky nightclubs have ever worked a corporate job . . . at least a much smaller percentage than it cities where it is common to be at least as interested in books as in movies, at least as interested in the heart and mind as the body.

So, anyway, Xian did a Hex VIP event as a run-up to a larger ball and Blue Blood were media sponsors of the event. I did not ask Xian what her reasons or inspirations or motivations were, but one of the possible themes for the event was Corporate Goth. So here are the gothic photos Forrest Black and I shot at the event. If you might have otherwise wondered at quite what the theme was, now you know. Unless, of course, you didn’t read this and just went straight to the pics. I think everybody looks really great, so enjoy.

Posted by Amelia G on April 8, 2008. Filed under Blue Blood. You can follow any responses to this entry through the RSS 2.0. You can leave a response or trackback to this entry
Tags: corporate-goth, counterculture, cyberpunk, fashion, gangsters, goth, gothic, hex, john-shirley, richard kadrey, steampunk, street-culture, tattoos, william-gibson, xian