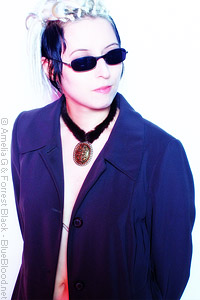 Since a bunch of folks really enjoyed the fun Hex Hollywood gallery we recently released, I thought it would be enjoyable to catch up with Xian and give everybody a bit of insight into the mind and motivations of the creative force behind these events. Xian is dedicated and involved in the Los Angeles underground scene as an active and energetic promoter, DJ, coder, community host, and much more. In addition to the Hex events, she is also involved in or responsible for an impressive array of cool clubs and projects, including Malediction Society, Disko Nekro, The Darkroom, Perversion, and even the monthly goth industrial deathrock skating excursion that is Wumpskate. And when there is some spare time, she even runs the LADead.com community website for the Los Angeles underground scene.

She took some time out to share her thoughts and perspective on Los Angeles club life with us.

1. Given just how many clubs and events you are involved with, we get the impression that you don’t sleep much. Tell us what an average week schedule is like for Xian?

Ugh, this could get complicated, so I’ll try to keep it simple:

Summed up, I am DJing 3-4 nights a week these days, meanwhile holding down a full time web development job (40-50 hours). Non club nights I clock in about 2-3 hours of web work, promotions, and graphics design, and during the day on weekends this jumps to about 4-5 hours. Unless there is a special event coming up, then it jumps up significantly. As far as sleep goes, I probably get anywhere from 4-5 hours of sleep on week nights and 7-8 hours of sleep on weekend nights.

A bit crazy I realize, but I got more tired of sleeping my life away than actually being tired (chronic fatigue). And there’s this pressing sense that I am running out of time to do the things I want to do and make something of myself.

2. What do you find most rewarding for keeping such a hectic schedule?

I could say something cliche like personal satisfaction, or that sense of vindication for overcoming odds and obstacles. Or that I like to keep busy so I don’t have much time to dwell, or that I like to give people with talents and wares a place to showcase them. And it would all true. But at the heart of it all I am chasing a dragon.

I firmly believe that our experiences in life are precious, particularly those key moments where one feels truly and completely alive. For myself, I have discovered that I am particularly fond of this moment in the nightclubs and events. It is the kind of experience that I can involve other people in, and enable them towards. And in my own personal philosophy, because this experience requires the presence and perception of other people.

As a DJ, it is that moment of establishing resonance with the dancers, and the story that unfolds. As a dancer, it is the experience of getting lost entirely in music, and being allowed to move how you really feel. And as a promoter, it is that feeling of having taken a concept and breathed life into it, paired with the audience that partakes of it. These are all addicting, cathartic, and simply without compare for me. Each moment is rewarding.

3. You have been doing all this work for a while now, what are some of your goals with it? What future would you like to see?

WORLD DOMINATION!!! Actually, I have no idea.

My sense of time is fairly awful, and so traditionally I have just kept moving forward and would stop and consider opportunities as they pop up. The HEX HOLLYWOOD events, on the otherhand, force me to think about the concept, plan, and execution months in advance. Which pretty much taps my mana until the round is over.

As far as the future is concerned, I would just really like to see the darker underground scenes and communities continue to evolve, grow, and thrive. We have become one of the oldest of the (post)modern subcultural legacies, and we’re perhaps one of the most internally diverse. People from all walks of life, for all sorts of reasons come to the clubs, read the literature, listen to the music, and participate in the scenes and communities. This is something I find endlessly fascinating.

4. What are the top aspects of of the sort of spooky goth-industrial darkwave punk rock nightlife scene that you would like to change?

It is my opinion that the clubs contribute heavily to the longevity of these scenes. We bring the people together, encourage the aesthetic, and showcase the music and goods. So the biggest problem that I see is that so few of the involved people are sincerely committed to the concept. DJs and promoters looking for fame, money, and popularity are a dime a dozen, and they inevitably are the main source of drama and jaded patrons. Jaded patrons who in turn are unreliable in situations where a dozen people could make or break a club,

So the obvious answer for me is that I would just like to see more people get involved out of a love of the scene, the experience, and the music. Sincerity and dedication is where quality begins…along with the obvious prerequisite business competency (see, not a total idealist). Here in Los Angeles alone there has already been four “eras” where our scene has thrived, that I am aware of, and we are on our way to a fifth. Elsewhere, I get the impression that a lot of people are still waiting on someone else to do something. Which is too bad. Apathy begets inaction, and inaction depreciates everyone’s life.

5. Given how notoriously political the Los Angeles club scene has a reputation for being, how do you manage to get along with everybody?

My biggest personal problem has always been that I have about as much tact as a sledgehammer, and no qualms about telling people what I think of them or what they are doing when set off. Normally I am quite aloof, so the contrast just makes it all the more jarring. So having worked with over half the DJs and promoters, and a good number of the fetish performers here in Los Angeles, I have been privy to a fair amount of arguments and falling outs.

More often than not it is a behaviour or circumstance that I get upset over, or them with me, but most are quickly resolved. I am just not one to condemn a person as an entire whole because of a little part, and I get the impression that this is a relief to people. Individuals who walk around pinning everyone’s faults and fuck-ups on them will obviously have issues with getting along with them. People change and grow and mature. So should your concept of them.

Posted by Forrest Black on October 23, 2006. Filed under Blue Blood. You can follow any responses to this entry through the RSS 2.0. You can leave a response or trackback to this entry
Tags: clubs, deathrock, Disko-Nekro, gothic, hex, hollywood, industrial, interview, LADead, Malediction-Society, Perversion, The-Darkroom, xian