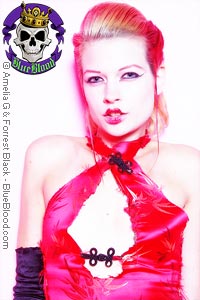 DJ Xian likes to throw big events for big dates. Halloween is coming up, so you know she’ll be throwing another Hex Hollywood bash. Along with the venerable Panpipes, Blue Blood sponsored the last Hex Hollywood bacchanalia on 06/06/06. In honor of the date, the theme was Angels, Devils, Saints, Sinners, Undead, Nuns, Priests, Gods, Monsters, Virtues, and Vices. Costumes turned out heavy on the angels and devils. A highlight of the evening was the performance by the crew from CORE, Constructs of Ritual Evolution. A low point of the evening was when we broke a lens. As it turned out, the gentleman, who tripped over the cord attached to our camera, was gallant enough to kick in a few bucks towards a new one and then Samy’s gave us a truly godlike deal on a replacement, so it ended up not being so bad after all. In this series of some of the hottest looks from the night, you’ll see where we change lenses and backdrops, so now you won’t have to wonder why. All in all, Xian’s “three levels of pleasure and pain” was a huge extravaganza, packed with people who really did it up, and had plenty of fun.