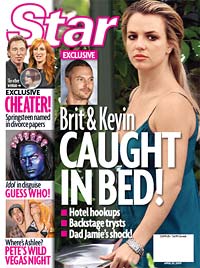 Whoo-hoo! Agent Aeon just alerted me about being on the cover of Star Magazine this week. A few days ago, a charming editor from Star (who knew they had nice peeps over there?) contacted me about the sexy blue photos Forrest Black and I shot of Adam Lambert. He also interviewed me about my impression of Adam Lambert, formed while shooting him at a Blue Blood-sponsored event, that I wanted Adam Lambert to win American Idol, etc. Mostly, we talked about Led Zeppelin (both fans, although only he has a Zoso tattoo) and booze (for excess, he prefers red wine and I prefer beer, he likes Pabst Blue Ribbon, I like Stella Artois, and we both like Shiner Bock.) I knew there was going to be a feature in Star, but I didn’t realize it was going to be a cover feature.

I am really happy, just tickled pink to have photography in Star without adjusting shooting style at all. The photographic work that Forrest Black I produce is very much about shooting individuals who, whether or not they are celebrity famous outside of their immediate circle of acquaintance, have enormous star quality with an alternative unusual aesthetic. Even in a room full of sparkling people, Adam Lambert shines extra bright. The night we photographed him, there were actually people who were pissy that Forrest Black and I took our time with someone like Adam Lambert and didn’t just shoot any random rude person who made no effort getting into costume yet felt entitled. When we shoot at an event, or select who to book for anything, we look first and foremost for quirky, unique, larger-than-life personalities. At an event, we also focus on people who really embody the spirit of the event. So, to anyone still holding a grudge that we took extra time for people like Adam Lambert, I’d just like to point out that maybe, after this many years, we’ve got a good eye for raw stardom.

Adam Lambert got more of our time and attention because he deserved it. I knew I wanted to shoot Adam Lambert the moment I laid eyes on him. Even on an extremely competitive show like American Idol, they do not get many people with an Adam Lambert level of gracefully powerful presence. I’m watching AI this season and rooting for Adam Lambert to win. It is not just that he has rockstar appeal, but that he stands out even next to other really fabulous people.

Also Pete Wentz from Fallout Boy parties with tattooed strippers, Britney Spears might have sex with Kevin Federline on purpose, and Bruce Springstein is named as the other man in divorce papers. Star Magazine hits newsstands tomorrow.

Posted by Amelia G on April 8, 2009. Filed under Blue Blood. You can follow any responses to this entry through the RSS 2.0. You can leave a response or trackback to this entry
Tags: adam lambert, agent-aeon, american-idol, britney-spears, celebrity, pabst, pete-wentz, photography, shiner-bock, star magazine, stella-artois, tattoo