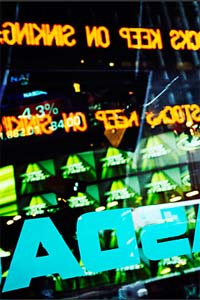 Time Magazine says, “Call it the Decade from Hell, or the Reckoning, or the Decade of Broken Dreams, or the Lost Decade. Call it whatever you want — just give thanks that it is nearly over.” Time Magazine’s Andy Serwer article, The ’00s: Goodbye (at Last) to the Decade from Hell seems like it should be a New Year’s piece, but sometimes it is hard to wait. Heck, I’d intended to post this on December 31 and here I am posting it early too.

The last decade was certainly one filled with digital snake oil and the rise of wikiality over reality, tonal arguments over logical debate, and the erosion of freedom and privacy in the developed world. Many hipsters love to observe on how zombies are awesome monsters because they are weaker than their prey but make up for their shambling loserdom with numbers. So the past decade also saw the rise of people jumping up and down shouting individualist buzzwords while conforming as fast as humanly possible. And I’m not too thrilled by the economic and work ethic evolution in my circle of acquaintance, where so many people I know have gone from talking about their creative endeavors to bragging about how they are leeching money out of the “system”. But those are my complaints.

Time Magazine has their own top ten reasons to consider this past ten years a lost decade. They even include a photo essay of The 10 Worst Things About the Worst Decade Ever. Time’s top picks included The Contested Presidential Election of 2000, 9/11, Invading Afghanistan, Iraq, Tsunami, Hurricane Katrina, Market Meltdown, Bernie Madoff Ponzi Scheme, The Disintegration of Detroit, and Guantanamo.

Fashion retailing guru Mary Portas referred on her show to the decade in question as “the naughties” as in all for naught.

Posted by Amelia G on December 24, 2009. Filed under Blue Blood. You can follow any responses to this entry through the RSS 2.0. You can leave a response or trackback to this entry
Tags: andy servwer, debate, digital snake oil, freedom, hipsters, hurricane, individualist, magazine, mary portas, meltdown, naughties, privacy, time magazine, wikiality, zombie, zombies