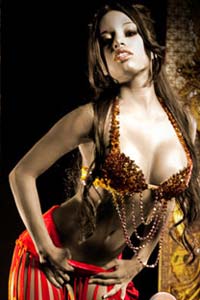 Although the photo at the right does not show her in a red cape with boots, Lupe Fuentes should really be wearing a Mighty Mouse costume right about now. Last week, she flew from Spain to Puerto Rico to give crucial testimony on behalf of her fan Carlos Simon-Timmerman.

See Carlos Simon-Timmerman took a trip to Venezuela and made the error in judgment of buying a DVD called Little Lupe The Innocent, Don’t be Fooled by her Baby Face . . . at a flea market. On his way back to New York, he was arrested during a stopover in San Juan and his DVDs were seized. A flea market pirate DVD is not likely to have a lot of information on the packaging about who produced the videos or photos or how to get in touch with them. So Carlos Simon-Timmerman spent months in jail, awaiting trial on charges of possessing and transporting child pornography, crimes which could result in a twenty year stretch in prison. Fortunately for him, Assistant Public Defender Héctor L. Ramos-Vega and his legal team know that the thing MySpace is most effective for is getting in touch with pornstars. They contacted Lupe Fuentes aka Zuleidy Lapiedra aka Little Lupe and she agreed to come to Puerto Rico.

Lupe Fuentes was really the last hope the defense had. Apparently, a Special Agent of Immigration and Customs Enforcement, who specializes in this sort of case, gave expert testimony that Little Lupe was “definitely” underage. First of all, even though I know someone who works for the US State Department as a Citizens Services Specialist specializing in International Parental Child Abductions, it seems odd to me that there is someone who specializes in deciding whether depictions of graphic sex acts feature overly young performers or not. So I think it is not the oddity of the micro-niche of the job, but that I can’t imagine anyone wanting to train in figuring that out, not anyone I would want to know anyway.

So I had pretty much written this article and was just going to round it out with links to things like the Lupe Fuentes Fleshlight which can be purchased with a full personalized version of the thumbnail above. This is reportedly Fleshlight’s tightest appliance to date and features the new exclusive Mini Lotus inner canal texture. And I was going to provide links to some of the various sites Lupe Fuentes has been contracted to star in over the years.

Only she told Howard Stern that she is twenty now. In the prosecution’s defense, Lupe did look young enough when she started performing that I know some adult industry people questioned the content featuring her. So it occurred to me to check the registration and publication dates.

The most likely story here is that Lupe Fuentes started performing as Little Lupe when she was eighteen or nineteen-years-old. Once she was in her twenties, she both filled out some and got a bit of a makeover, including getting new breasts, teeth, and lips, and a new stage name, so she comes across older now (and in my opinion sexier) because she is older. Her presentation seems to fit her sexual enthusiasm better now. And Lupe Fuentes performed the great and decent kindness of going way out of her way to see that justice was done for one of her fans. Oh, and she lied to Howard Stern about her age because it is really none of his business, but Howard Stern often asks intrusive questions. Or Howard Stern’s interrogation style could even be confusing to someone who speaks English as a second language and maybe Lupe thought the question was about what age she was in the video Little Lupe The Innocent, Don’t be Fooled by her Baby Face. That is what I think happened and I think it is super cool of Lupe Fuentes to do what she did. Assistant Public Defender Héctor L. Ramos-Vega said, “Lupe walked into the courtroom and it was like a courtroom drama in a movie. When Lupe walked in, that tiny human being, she looked like she was seven feet tall. She owned the room, and she immediately won the jury over.” I am going to believe that Lupe Fuentes is a hero.

But I am not going to link to any sites which feature her nude because, if she understood the question and was telling the truth to Howard Stern and she is twenty-years-old, then the first site featuring Little Lupe would have started publishing when she was approximately sixteen or seventeen, depending on when her birthday is. And US Customs did seize DVDs from Carlos Simon-Timmerman, besides the Lupe DVD. And Carlos Simon-Timmerman did make his purchasing decision in a Venezuelan flea market, where he may have believed he was getting something illegal in America.

I see pretty credible sources which list Lupe’s birthday as January 27, 1987, which would make her twenty-three now and probably nineteen when she started performing and nineteen or twenty when the first site built around her went live. So, while I am going to play it safe, I give props to Lupe Fuentes. For the most part, it is a cool story of justice prevailing in the end. It is a courtroom drama which has captured the love of fans and ranked Lupe Fuentes, by certain standard tracking systems, the third most popular pornstar on the net yesterday and the second most today. Soon she will be number one. Like I said, I am going to believe that Lupe Fuentes is a hero.