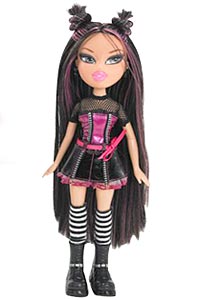 A few years back, a number of members of Blue Blood sites started writing in to say someone was making dolls of various Blue Blood hotties. As I recall, Mistress Domiana and Fetus de Milo were two where there were specific dolls folks felt were based on photos Forrest Black and I had shot of them. Maybe there were other girls; it didn’t seem at all significant at the time, and the Bratz have changed enough over time that the Jury in their recent court battle (more on this soon, even though it is not technically a sex trial) asked whether they could find for the plaintiff in the first generation Bratz and against for later ones. To the best of my knowledge, neither I, nor Forrest Black, nor anyone I’ve photographed has ever met any of the brass at MGA Entertainment, the company who launched Bratz as their primary toy line in either 2001 or 2002, depending on who you ask. I guess MGA Entertainment is headquartered in Van Nuys, which is at last geographically close to Hollywood, if not culturally. So who knows.

Blue Blood hottie April Flores got in her prototype this week from Topco. The prototype is of the Wild Fire Celebrity Series Voluptuous CyberSkin Pussy. So that appears to be working out, but I’ve never really found a ton of business value in that type of merch, so I never gave much thought as to whether Bratz were or were not inspired by Gothic Sluts or whatever.

Some folks who did give it a lot of thought and were positive Bratz owed them an intellectual property debt were at the doll manufacturing and marketing powerhouse Mattell, home of Barbie. Now we could start comparing Barbie and Bratz. We could discuss how generations use fashion to define themselves. We could hear opinions from parents who feel Barbie (which they played with) is classic and wholesome and Bratz (which their kids want to play with) just teaches little girls to be whores. We could go into the radical feminist view that both Barbie and Bratz give girls unrealistic ideas of what a woman’s body will and should be like, setting the stage for adult eating disorders, antidepressant abuse, promiscuous sex, and excessive submission to the patriarchy.

Those might all be valid views, but the case, presided over U.S. District Judge Stephen G. Larson, this week was not, as many people supposed, about the ways Bratz is or is not similar to Barbie. The Bratz concept was developed by someone while he was working under exclusive contract for Mattel. His exclusive contract specifically stated that all such creations devised while in their employ were property of Mattel. This is a pretty common type of agreement for development teams. The idea is to prevent someone, especially someone with tons of access to proprietary info, from cashing their future competitor’s checks, while coming up with what they intend to market as a hipper and more current version of their employer’s product. Basically, this type of employment contract is explicitly to prevent precisely what the Bratz creator did.

So Judge Stephen G. Larson found in favor of Mattel. Mattel and MGA Entertainment have a couple of months now to decide whether to make Bratz and perhaps MGA a Mattel subsidiary, sell Bratz to MGA, license Bratz to MGA, or force MGA and all wholesalers and retailers to return any remaining My Hip Little Hoochie Barbies Bratz and then stack them up in the parking lot at 16380 Roscoe Blvd., pour newly less expensive gasoline on the clubby doll pile, and light it up.

Posted by Amelia G on December 8, 2008. Filed under Blue Blood. You can follow any responses to this entry through the RSS 2.0. You can leave a response or trackback to this entry
Tags: april-flores, barbie, bratz, feminist, fetus-de-milo, gothic, hotties, mattel, mga-entertainment, mistress-domiana, pyromania, sex, trial