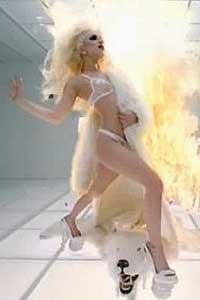 Alexander McQueen was such an extremely talented and out-of-the-box designer that even punks who hate the whole concept of fashion could appreciate his work. In keeping with this, Alexander McQueen said that he once used a pen to scrawl the word CUNT into the lining of a coat he worked on for Prince Charles. David Bowie’s coat on the cover of the Earthling CD was by Alexander McQueen. Hopefully, there were no bonus notes in David Bowie’s clothing lining.

As vampires have become more mainstream-acceptable, pockets of the gothic subculture have been inclined to reject the whole vampire thing. Okay, I wrote my thesis on vampire stuff, so maybe this is no surprise, but the whole immortality aspect always got a thumbs-up from me. My family is packed with humans who tend to be both long-lived and kinda dicks about funerals. The way that Alexander McQueen pushed the envelope in life will give him a certain kind of immortality.

I have never met Alexander McQueen, but my own life had a lil too many deaths in it this past year. In case Blue Blood is the only site you’ve looked at in the past day, Alexander McQueen was supposed to attend his mother’s funeral today, but he was reportedly found hanged in his home yesterday. He leaves a remarkable fashion legacy behind, but it always seems extra-tragic for the world to fail to hold onto someone like Alexander McQueen, who had so much to offer.

As many readers know, Blue Blood temporarily closed its forums because I was appalled at the heartless and soulless way some people were responding to the death of a friend of mine. I sort of poked my head up for Groundhog Day, but, even if I did see my shadow, I don’t think six more weeks of digital winter is the way to go in my pixelated universe. So I suppose we’ll be back to daily updates and interactivity shortly.

This past year, Alexander McQueen’s work was most notable in the pop culture zeitgeist in the Lady Gaga video for her single Bad Romance. People commented most on the crazy shiny green lobster claw shoe outfit in Bad Romance, partly because Lady Gaga performed at the fashion show where that look debuted, but a lot of the designs in that were Alexander McQueen. So let me leave you with a celebration of some of what made Alexander McQueen pretty fantastic. After all, the clock only runs in one direction, so, not too be too goth about it, but we all kinda get the same ending for our story. The part which matters is attempting to be as fantastic as possible during the journey.

Posted by Amelia G on February 12, 2010. Filed under Blue Blood. You can follow any responses to this entry through the RSS 2.0. You can leave a response or trackback to this entry
Tags: alexander mcqueen, bad romance, david-bowie, death, fashion-show, goth, gothic, immortality, lady gaga, prince charles, punks, vampire