Okay, Flavor Flav is officially off my TiVo queue. For those of you who haven’t been following his post-hip-hop reality television career, here is a quick recap. Flav appeared on the TV show The Surreal Life. I’ve never seen it, but apparently they picked oddball assortments of celebs such as Vince Neil and Gary Coleman and the not-dead dude from Milli Vanilli and did stuff like send them shopping at my local grocery store. Leggy blonde bombshell Brigitte Nielsen appeared on the show the same season as Flav and they had a relationship, at least while the cameras were on, and this spawned a spin-off show called Strange Love, which I’ve only seen clips of on Flav’s newest venture Flavor of Love.

Full Disclosure here: I usually limit my reality show viewing habits to The Apprentice, but I watched the entire first season of Flavor of Love (and the first couple of America’s Next Top Model so long as I’m letting it all hang out.) The basic conceit in that eighteen or twenty chicks go to a house where Flav supposedly lives alone and lonely but for his extremely competent butler and maybe whoever drives the stretch limo SUV. They compete for his love because all he wants is to really connect with someone real. The episode where Nielsen visits shows how ludicrously more chemistry he has with her than any of the contestants. At the end of the first season, he chose the game-playing girl he supposedly hadn’t banged yet, but who had given him some non-penetrative threesome shower action. Apparently he then banged her, didn’t hit it off with her, and they parted ways, except for a contractually obligated and tepid season reunion.

The first season of the Flavor Flav-produced Flavor of Love show, I was kinda buying the story that he was looking for love in a singularly modern and peculiar way, but doing it genuinely. This season, it comes across way more like he is just a typical womanizer in love with being in love but no way willing to be with one woman in a real give and take relationship, no matter how many times he proclaims his love and deep emotional connection.

So he gets this one girl nicknamed Toastee and this other one nicknamed Nibblz (because they have to blur out her nipples in most shots) to curl up and spend the night with him. Toastee says she doesn’t like to share, but mentions casually to some other girls later that she got the impression Nibblz gave Flavor Flav some manual satisfaction. Now, if you took a general sampling of the female population, a decent number of them would give a member of a seminal group like Public Enemy a hand job without a lot of provocation. Narrow that sampling down to a chick competing to be his girlfriend or wife on a reality show and I kind of think less of any of them who wouldn’t take the opportunity. 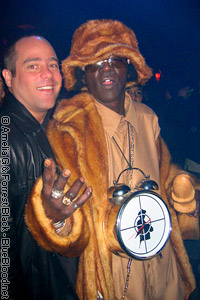 So, because this is reality TV and has to have conflict above and beyond even interweb drama, Nibblz swears to the other girls that she didn’t jack Flav off and blows a total gasket and goes and tells Flav . . . wait for it . . . not that Toastee is spreading lies about their sexual canoodling . . . nope, (probably because Toastee knows a jerk-off when she hears one) instead, Nibblz tells Flav that Toastee is a pornstar and can be seen naked online on Barely Legal and on “VHS”. Who the fuck makes movies for VHS any more anyway? I mean, I have a player, but I don’t even know if it works at this point. Mind you, Nibblz has already told Flav that she has modeled nude and has a stripper pole in her living room and the implication is that her day job is dancing.

So, in conclusion, I generally applaud anyone with a strong and unabashed personal style. When my homeboy Lange and I met Flavor Flav in Vegas, he was gracious and pleasant. I know that a lot of what happens on reality shows is more scripted than real. But, as Flav gets top producer credit, real or scripted, I hold him responsible for presenting himself as a double standard-having, sexist liar. And, because I thought he was cool, I’m disappointed. Flavor Flav’s got problems of his own. And he needs to fix himself before he is ready for a real relationship with an honest and real, threesome-loving, fast food-eating, non-materialistic, and non-jealous woman.