Like me, Zak Smith (Zak Sabbath to his porn fans) comes out of the DC punk scene. Maybe this commonality is why his comments about California really resonate with me, but I feel like he has at least a really good East Coaster grasp of Cali. Zak Smith writes, “It’s not easy to know what’s going on in California . . . The people in charge are often trained actors, and two of its biggest businesses are aerospace — which is secret — and movies — which is lies . . . I’m from DC. DC punk bands are known for refusing to play ball. In New York, they’re known for trying to play ball, and failing, and then going back to not playing ball. SoCal bands are known for playing ball and being good at it and liking it and laughing at you. And then being on cable TV shows where they get tattooed.” Too true.

In We Did Porn, Zak Smith also writes about the peculiar mood society was in during the “zeroes” at the turn of the millennium. The best art explains something the viewer believes deeply to be true and expresses it in a way the viewer had not previously considered. Zak Smith’s deconstruction of the millennial culture of whiny BS is art; the first thing I thought reading it was that other people needed to read this too. He talks about how politics and news had gotten to the point where the disparate versions of reality presented were utterly incompatible with one another. He points out that the internet facilitated the creation and dissemination of antifacts. Zak Smith postulates that this cynical time lead to a sense that reality was slippery and indistinct, with blurred cause and effect. He writes, “People’s essential hopelessness made everything seem boring and they only talked about a topic if everyone could agree that it was stupid. Wit consisted of coming off as the least bitter complainer.” He describes reality television as offering “the thrill of finding yourself a victim of electoral fraud without the disappointment of realizing it might matter.” Most poetically, Zak Smith ruminates on zombie popularity, “In movies, zombies were the most popular monster. They are unusual, among monsters, for being inferior to their victims and winning only by weight of numbers, and for having no brains, but wanting to eat them.” A lot of the descriptions in We Did Porn reference this sort of slippery reality, stating maybe it is A or maybe it is not A, and this really works for the material.

The most amusing water cooler fact in the book is that the British Secret Intelligence Service used to use semen as disappearing ink. “Happiness writes white”, he says. I hope the semen thing is not an antifact because it is awesome.

Full disclosure: To this day, Zak Smith and his girlfriend Mandy Morbid remain the only people to ever cite working with SuicideGirls as a reason they could not work with Blue Blood. 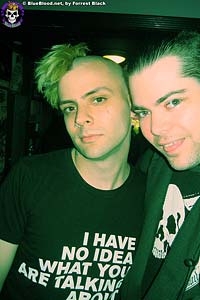 People that Zak Smith and Forrest Black and I know in common, such as Voltaire, had mentioned a number of times that Zak Sabbath wanted to meet us. So I was surprised when Forrest Black and Zak finally met at the Young Hollywood party for Carlos Batts and then Zak said SuicideGirls wouldn’t let him do anything on the list of things I’d assumed he wanted an introduction for. Forrest Black and I actually shot and went to lunch with Voltaire during one of the stays at her home that Zak Smith mentions in his book, but Voltaire was irritated that Zak was trying to get her to do porn, when she’d already said no, so she didn’t invite him to lunch.

When I started publishing Blue Blood in 1992 from the DC suburbs in Maryland, maybe I was just too new or too far away from Los Angeles, New York, and San Francisco to realize there were teams. Maybe the teams arrived with the internet. I don’t know. At the time, however, the best part of doing Blue Blood was the enormous access it gave me to interesting people. It makes me feel a bit melancholy that now doing Blue Blood sometimes throws up a wall instead. I don’t really understand how the teams are delineated or chosen. I think they handed out the rulebooks in Hollywood and I was in Rockville at the time and missed it. I don’t know if I ended up on the wrong team. Or Zak ended up on the wrong team. But he doesn’t seem like the sort of person who should be on a different team from the one I’m on, so I feel like somebody did something weird with the draft picks.

I feel like the lines must have been drawn all wrong. If someone would show me the map people are using, I think I might be able to figure out the flaw in the cartography.